one is the loneliest number: gender in tony abbott’s cabinet 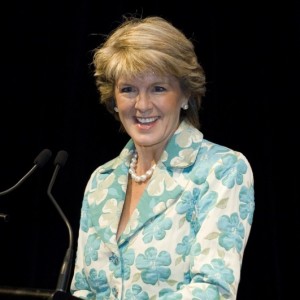 The cast of Gilmore Girls, the cast of 7th Heaven, the Afghani national cabinet and, if you think about it, most Lynx commercials have more of the lady folk in them than Tony Abbott’s new cabinet.

PM Abbott is ‘very disappointed’ that his new line up includes only one female MP. Anyway, that woman, Julie Bishop, will become the lone ‘female influence’ in the top tier of the Coalition government as she takes on the portfolio of Foreign Affairs.

It’s an odd look for a guy that’s played up his closeness to women people (standing next to his daughters, smiling, encouraging the sex appeal of his candidates, that sort of thing). But there are less women in parliament than men on all sides of politics. How surprising is it that few are in high up positions?

When it comes down to it, our parliament is supposed to be vaguely representative of the groups that make up the nation. Which is awks, sure, because lots and lots of groups are underrepresented. But Australia’s population is roughly 50/50 ladies and men, and the numbers in parliament should be as close to that as possible to ensure that a variety of points of view are considered in law making. Liberal Senator Sue Boyce was vocal in her disappointment at the choices for cabinet positions. She went as far as to say that the Liberal Party needs to look at their structural arrangements and how these may be affecting recruitment of women into the party in the first place. Having balance, to her it seems, means a stronger government.

Abbott did have more than one woman to choose from. He placed Bronwyn Bishop in the Speaker’s Chair, demoted Brisbane MP Teresa Gambaro and placed another four ladies in his outer ministry. What’s lacking is representation at the top of the tree. This is why people are up in arms–the big wigs make big decisions, and it doesn’t seem balanced for only one lady to be in on that party.

What do the parties do about gender generally?

The Liberal Party don’t have any formal measures for ensuring that women are represented at any particular level of parliament, though they do have a policy of employing 50% women  in their administrative arm. As such, there’s nothing really stopping all future Liberal candidates from being men. This is something that pops up every time we talk gender representation in parliament–if there’s no encouragement for women to enter the field, it’s argued the ‘depth of experience’ of female parliamentarians won’t ever be properly realised.

The Labor Party, on the other hand, has an affirmative action policy of 40:40:20, in which at least 40% of candidates for seats must be women. This is a fact that Labor MPs are keen to spruik, because they have had consistently higher levels of women in cabinet (six women were in KRudd’s before the election).

Neither of the major parties reaches that 50/50 gender split, and if they did there would still be a chance that women could end up on the back bench. But some voices in the Liberal Party have been connecting this lack of quota with the shortage of cabinet ministers, and it’s something that has been spoken on and investigated well before the election campaign properly kicked off.

Is meritocracy even a thing?

So there’s an argument that the Liberal National Party Coalition is more progressive than Labor because they place ultimate emphasis on the talent of candidates rather than whether or not they’re male or female. This is an argument that is used to rebut gender quotas in a lot of situations. If we follow that lead, you finally reach the conclusion that there aren’t that many talented women in the Liberal or National parties. If there were, maybe they would have ‘matched the skills’ of their male counterparts readily, and then more would have been admitted into cabinet. The idea that politics has been dominated by men for so long because they were the ‘best’ candidates seems a touch problematic.

It seems improbable in light of there being more women in high up roles in Labor and the Greens. Are they fighting it out against less able men, or are women in the Liberal Party just slightly more crap at their jobs overall?

Here’s the thing: Abbott didn’t have a whole lot of women to choose from, because there aren’t that many there to start with. But in terms of the faces of our new government, it’s a lotta men in ties and one lady with impeccable taste in brooches (seriously, look for them in Question Time). Does that represent the average citizen of Australia?

Let us know your thoughts.