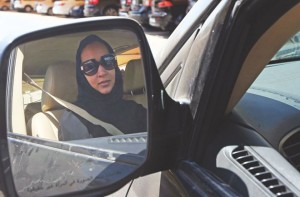 Saudi Arabia is a country of many unique virtues, one of which, unfortunately, is being the only country in the world where women are not allowed to drive. No law officially bans women from driving, but nonetheless they can’t. Under Islamic Shari’ah law, which is not just their religious law but also the political law, Saudi women are always to be accompanied by male ‘chaperons’ when travelling.

This law gives women’s rights to marry, divorce, travel and work over to their male guardians, letting men decide for women’s lives and banning women’s free choices. There have been scores of attempts to reform such gendered discriminations, which segregate men and women’s home entrances and practice gender wage inequality; however, these attempts concluded only in vain, by oppression from Saudi labour ministry and religious forces.

However, on the 23 October 2013, more than 60 women from various regions of Saudi Arabia protested the unspoken ban on driving by filming themselves doing so and outrageously posting the clips online.

This protest was planned beforehand and spread through social media. The news of activist women’s intent to protest for their equal travelling rights reached the kingdom’s Islamic government prior to the planned protest day. In response, government officials called some distinguished Saudi activists to give an admonishment to the protestors not to go ahead with their rebellious agenda.

Many women involved in the protest were caught on the road and detained for several hours, but none were severely punished, unlike the similar ‘Women To Drive’ movement in 1990, where activists were captured and deprived of their passports and, for some, even their jobs.

Among the very rare women in positions of power in Saudi Arabia, some educated and renowned women joined the 2013 protest in various ways. Aziza Youssef, an activist professor at King Saud University, drove around town on the protest day and noticed two suspicious cars closely following her vehicle – possibly sent by the government. Al-Mubarak, a teacher and blogger, published his opinions against the driving ban on his blog and was called into the capital city, Riyadh, to be interrogated by the Internal Ministry’s Criminal Investigation Department.

Although we are taught that sexism is forbidden in contemporary Western cultures, it is covertly present in every corner of our society. Regardless of how many, many followers Julia Gillard and Oprah Winfrey (and Britney Spears still) has, the general stereotype in the West is that men shall lead and women shall follow – men shall decide, women shall follow or simply tag along, just like the Saudi law. No matter how much we deny it, sexism has quite thoroughly permeated our minds and we’re subconsciously dictated by it: the undeniable wage gap, the portrayal of women in the media, prostitution, unhealthy body images… You name it.

In the midst of all these battles and reformations for sexual equality, sexual inequality is still deeply embedded in most communities and people’s minds, as evidenced by these unspoken driving bans. This openly insulting ban, which implies that women are either incapable to make choices for their own paths and directions or that they are owned by their male guardians, goes completely against the values we are taught in 21st Century Western cultures.

Ironically, according to the Saudi women activists that drove on 26 October 2013, their Saudi society seemed to welcome female drivers. But if their unofficial yet ultimate religious law forbids it, what choice do women have?