stop the tampons: a movement for women’s rights in detention 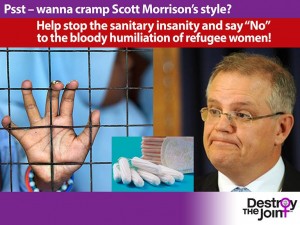 Information regarding female asylum seekers’ conditions in Australian detention centres has recently come to public knowledge. In some of these centres, the women are forced to approach SERCO officers to ask for tampons or pads during their menstruation cycles, only to be given one or two at a time.

Living in Australia and seeing Australian supermarket aisles and even advertising regularly, we know that there is no supply shortage of these products, so there is no reason for such a woeful distribution to asylum seekers. The humiliation of having to ask officers for these sanitary items comes in addition to what we now know occurs in detention centres from the reports of human rights violations, as a result of United Nations committees inspections of the facilities.

The charity RISE: Refugees, Survivors and Ex-Detainees brought this information to light, alongside other information about these detention centres, all in the face of SERCO being given millions of dollars to ‘service’ immigration detention centres – yet there is still inadequate and unacceptable access for women to sanitary items. RISE have also highlighted that this issue is not exclusive to Australia; and such humiliations are happening in the United States. On top of all this, many female refugees or asylum seekers are also the victims of rape, sexual abuse and other forms of torture and trauma.

RISE had this message to the Australian public in light of this information:

‘Just because it happens in other countries, or has been happening all the time, doesn’t mean we should allow this to keep happening in Australia. We should ask Australian women in particular to please advocate strongly around the issue of treatment of refugee/asylum seeker women in Australia and ask them to persuade female leaders/politicians in particular to have the courage to show empathy for women of colour, women who are less socially and economically empowered and Act Now.’

This issue had been acted upon by RISE in 2011 in a parliamentary submission to an enquiry panel regarding the Australian detention network; a Chilout also raised concerns with politicians such as Tanya Plibersek, but received an inadequate answer from then immigration minister Chris Bowen.

Well, in response to RISE’s call, feminist group Destroy the Joint has issued a call to its followers to send the government a message regarding the inhumane treatment of asylum seekers, using the very items which have sparked the outrage – pads and tampons.

The group’s message asks its followers to send one sanitary item to Scott Morrison, Immigration Minister, every month starting from the day after the message was posted (on January 5, this year). The intention behind this was to stop the ritualistic humiliation of women in detention centres, and to send the items directly to Morrison in order to keep the issue at the forefront of his mind; of course keeping it civil and hygienic, however to remind Morrison that ‘he is the Minister for Immigration not the Minister for Inhumanity.’

The response to this message started the campaign of ‘Stop the Tampons’, playing on the government’s ‘Stop the Boats’ campaign in reference to asylum seekers and refugees.

Some of the responses and what has been sent to Morrison have been so thoughtful and provocative a list of 24 Tampons that Send a Message on Buzzfeed – it’s definitely worth checking out here to see the creative ways in which Australian citizens are defending women in detention.

One can only hope that this creativity and subsequent bombarding of Morrison’s mailbox leads to productive change in the manner in which items are distributed to females in detention centres in Australia; and from that, we can send a message to other countries.

Until then, however…Scott Morrison’s postal box address is easily accessible.

One thought on “stop the tampons: a movement for women’s rights in detention”