booty backlash: kim kardashian versus the morally superior corner of the internet 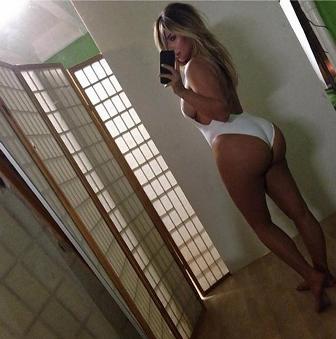 What is it about our society that is so hellbent on reducing mothers (especially new mothers), to soft, cuddly Mrs Brady types whose sole purpose is to produce milk for their nascent offspring, devote the entire fibre of their being to their children and stop caring about themselves?

Why are we so threatened by women who have kids, look fab, and are bursting with body confidence?

Kim Kardashian came up against this tut tutting from the morally superior section of the Internet recently when she posted an Instagram selfie of her post baby bod in a bathing suit, complete with side boob and a booty that is, let’s be honest, pretty amazing.

No sooner was it up than the villagers of the Internet sharpened their pitchforks.

Instead the article asks Kim K why she’s so ‘desperate to reclaim your hotness that you’re happy to discard your dignity and that of your daughter?’ Because there’s ‘nothing meaningful, clever, or stylish’ about the photo.

Yet the tune is different when supermodels Miranda Kerr or Heidi Klum get back into the Victoria’s Secret lingerie and onto the catwalk. That is their job, and it is expected of them. Similarly, Kim’s job is maintaining a particular public image to promote her reality television show and lifestyle.

So why should we crucify her because she caught a glimpse of her arse in the mirror, thought ‘damn I’m proud of that’ and snapped a shot to show her fans? I’m more surprised we aren’t applauding a photo that shows a woman proud of a body shape we don’t normally see in the mainstream media.

Of course, the hand wringing over at Mamamia follows the train of thought that despairs at why everything has to be so goddamned SEXY.

But let’s be real.

The woman in question here is Kim Kardashian. She makes a crust by living her life in the public eye and has always courted attention. The majority of the focus has always been on her body. It’s not like she was once a devout nun dressed in a habit who suddenly found a penchant for side boob baring swimsuits.

The Instagram selfie that has caused all the ruckus doesn’t stray too far from other photos she has posted in the past. Why must she now tone it all down and wear sensible floral blouses and mum jeans just because she has a baby? She hasn’t done it before so why do it now?

This photo alone does not equal an inability on Kim’s behalf to be a loving, nurturing and protective mother to her daughter. The idea that once a woman becomes a mother, she needs to immediately shed herself of any identity she had before in order to become more maternal, belongs with the dinosaurs.

Because all mothers are women, and they all have an identity that is separate to their role as a mother. We need to accept that, even if other mothers make choices that are worlds away from the choices we’d make.

If this decision is not directly hurting their children (as this selfie did not ‘discard’ the dignity of baby North), then the persecution is unnecessary. All it does is perpetuate a cycle of shaming women who don’t fit in with mainstream standards.

So enjoy the lofty view from your high horses, haters. The rest of us will be down here, getting on with the important stuff.

8 thoughts on “booty backlash: kim kardashian versus the morally superior corner of the internet”