credit where credit is due: julia gillard controls her own political legacy 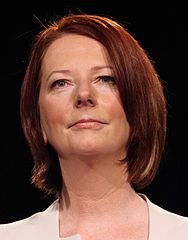 Most recently for Lipmag, I wrote about an upcoming television drama based upon Kerry Anne Walsh’s The Stalking of Julia Gillard, which will star Australian actress extraordinaire Rachel Griffiths as the former Prime Minister. Based on this adaptation, we can assume that this drama will be a sympathetic portrait of Gillard, both in terms of her political career as well as the media’s role in her downfall and the resurrection of Kevin Rudd. Gillard herself has embarked upon a speaking tour to endorse what is a simple message, in terms of the way in which her career will be remembered: ‘credit where credit is due.’

On Sunday, Gillard gave a keynote speech with this very title, hosted by the Victorian Womens’ Trust at the Town Hall in Melbourne. Thousands packed the hall to hear what she had to say. Sadly, I had work on Sunday and could not attend, but I followed Karen Pickering of Cherchez la Femme’s Tweets with a keen interest as she documented the occasion (don’t tell my boss that I was on Twitter at work…shh…) And I couldn’t help but agree with a lot of what she had to say. Pickering has written extensively on this event for The Guardian; and, yet again, I can’t help but agree with the majority of the sentiments which Pickering expresses here.

Accompanying the speech, the Twitter hashtag, #CreditJulia took off, perplexing many who had no idea that she still existed, and puzzling many, who saw the crediting as well as the hashtagging as the ‘curious rewriting’ of Gillard’s political legacy.

The content of Gillard’s speech itself addressed a lot of issues, from the issue of women’s representation in politics, to her own term as Prime Minister, as well as touching on political debates still plaguing the nation. Here are a few highlights which I can gather from Pickering’s tweets from the speech:

‘Women’s participation in work increased under Gillard where it plummeted in other countries, including the US #CreditJulia’

‘Disability Care started on July 1 2013 and this reform cannot be undone. She is proud of that and salutes all who enabled it #CreditJulia’

I think that the issue here is less of what Gillard had to say in her speech, which from all accounts appears to be provocative and challenging, but rather being in control of her own political legacy and reminding the Australian public that when she lost her leadership of the country, it did not mean that she dropped off the face of the earth. It’s interesting to consider the manner in which Gillard is remembered at this early stage. There appears to be two main camps.

The first is that Gillard was a charismatic and effective leader, who was clearly betrayed from within her own party, as well as by external pressures (i.e. the media) and was forced to relinquish her role in politics due to a misogynistic public sphere. Perhaps those who follow this line of thought filled the main part of her audience at the hall on Sunday; those who are determined to see that this is the legacy she leaves.

On the other hand, we have those who believe that Gillard was a traitor who should have done far, far more for women, refugees and workers, who instead focused more upon her public battle with Tony Abbot in a race which saw an overwhelming number of Australian voters become disillusioned when it came to the political climate.

Regardless of what you believe of Gillard as a leader, it’s clear to see that the reason behind all of these public events and indeed even the upcoming biodrama is simply to give credit where credit is due; to acknowledge what Gillard did achieve instead of it being overshadowed by what she didn’t. Sexism clearly plays a role in this, and it’s certainly admirable that she is clearly working so hard to bring attention to this and, in turn, to strive towards its eradication.

It’s interesting to note that at the end of her speech, Gillard received both a standing ovation from the members of the audience, as well as a barrage of Twitter hate. It just goes to show that opinion will always be divided over political leaders where policy is concerned, which is fair enough – but is it equally fair to give credit where credit is due?