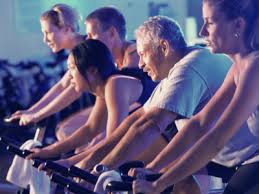 Something that has always confused me is this:

Why, if society wants fat people to exercise, lose weight and be trim, taut and terrific, are there no exercise clothes for fat people? Why are fat people ridiculed every time they set foot in a gym or are seen exercising outside?

I have a friend that used to run. It was something that she enjoyed – that feeling of strength, of using her body and her limbs. However, two things stopped her from running. One was her foot kept playing up on her and it hurt to run. The other? Ridicule. She made sure to run a little later in the day, or at night time, but she would still get idiot people yelling out insults from cars driving by, or strange looks. She stopped running.

Myself? I stopped exercising in public too.

There may have been some paranoia involved in this decision, but some of the paranoia was completely justified. The amount of stories I’ve heard from my female friends, not just the fat ones, but also the slim ones, about the harassment they face when they are out exercising on the streets is disturbing and sad. The number of times I’ve been harassed when out in public, exercising is disturbing and sad.

Another person told me that once when they’d left the gym, they’d overhead some people talking about one of the other women exercising. The gist of the conversation was, “Why is she even here? What’s the point? What is she wearing?”

Can women win at all? Can fat women win? Even when they’re doing what society tells them to do, they’re still not accepted. So, what do we do? Do we do what I do and refuse to exercise out in public? Do we give up something we might actually enjoy all together because of what people might say/do say?

No. I don’t want to and I don’t see why I should have to. I’ve already restricted myself to exercising in private. I won’t restrict myself to never exercising at all, because of some comment some ignorant person makes. I wish I were brave enough to speak up to these commenters in person, but I think I still have a while to go before I gather up that sort of courage. For now, I write.