feminism and testicles: men can be feminists too 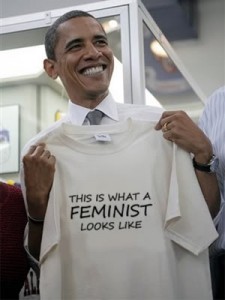 It is rare for a discussion on feminism these days to consist of only female voices. More and more men are taking up the cause of gender equality and discussing women’s issues. However there still seems to be a bit of controversy whenever a man claims to be a feminist.

When I tell people I write for Lip and explain to them that it is a feminist publication, they look at me a little confused. ‘But you’re a guy,’ they say. ‘Why are you writing for a women’s magazine?’

In my opinion, the notion that only women can be feminists is completely misguided. To disallow someone from subscribing to a movement (or whatever you want to call feminism) that critiques traditional gender roles because of their gender is logically flawed. Further, the argument that ‘you can be a feminist because you have a uterus but you can’t because you have a penis’ draws the debate away from more important issues; issues like the gender pay gap, education, honour killings, slut shaming, forced marriages and sex trafficking—just to name a few.

One accusation that is thrown around quite a lot at male feminists is: ‘You’re only a feminist because you want to sleep with women.’ Despite the explicit heteronormativity inherent in that kind of thinking, such a statement is generally insulting to around half of the human population. It presupposes that all men want is sex (surprise: we want a few other things out of life as well). Further, such an accusation implies that men are incapable of having meaningful relationships with women that exist outside the realm of sexual intercourse.

Of course there are (and will be) instances where a few men do describe themselves as feminists in order to take advantage of women. The issue is thinking that all men will act in the same way, or that women aren’t mature and capable of dealing with that in an appropriate way when it arises. Suspicion of men by women seems to me a lot like men’s suspicion of women entering politics or getting a university education. (Think along the lines of: ‘Oh, you can’t be here. But if you are going to be part of us then we don’t want you running the show.’) Men who subscribe to feminism won’t drown out the voice of women because they understand that doing so would be detrimental to the cause.

If men need feminism in order to bring about positive change in our culture, then feminism needs men. End of story.

One thought on “feminism and testicles: men can be feminists too”