Feminism: Fighting for the right of women to disagree 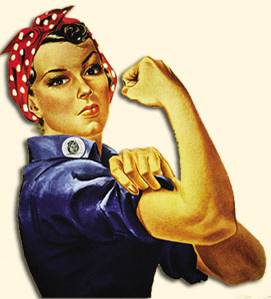 I really must give a shout out to one of my dearest social networking sites, Facebook. What a challenge it can be, every day to connect into the hearts, minds and walls of so many friends, colleagues, and often strangers whom you’ve befriended and now know many of their private details.  But despite the potential to stay in touch with people and find out about what’s going on in everyone’s lives, the unfiltered content that is so easily shared and liked makes me a little worried. So the latest is something that made me think long and hard before I could come up with the difficult decision whether to like, or not to like. It took me a while, but I just couldn’t bring myself to click that button.

It was this little chunk of text that made its appearance in my Facebook news feed:

That set me off into a whirlwind brainstorm session about what it all meant and the more I mulled it over, the more I began to realize the importance of individual choice in the grand scheme of the continuing feminist rights movement.

The achievements of our feminist foremothers are something to be proud of and grateful for, but the expression of gratitude, or lack thereof, is an individual choice. You can’t tell someone how to be appreciative, and you also can’t expect that it’d be your right to do so, especially when the very core of rights being fought for advocate the opportunity of choice, and freedom to do so without repercussion.

Seemingly adding to the negative stereotype of a bunch angry feminist women, these few lines on Facebook really got to me. The post was popular, with around 30 likes, and a succession of at least seven comments adding bits and pieces that followed:

‘…and don’t vote or go into public bars.’

‘Or wear skirts higher than your ankles, knees or pants at all.’

But, continuing on my process of individual investigation, the more I thought about it, the more infuriated I became. Yes, feminists have fought for our right to be individual citizens and not just the lesser half of men. But by saying that women who ‘don’t agree with feminism’ should have their rights revoked, is immorally decrepit, to say the least.

It absolutely does matter where our rights came from, but the fact that we didn’t have them in the first place doesn’t mean we owe any type of gratitude for finally having the right to be treated as equals, no matter who fought for that right.

Of course, it would be nice, I can see, if people showed a little more respect for the history and herstory of men and women who’ve spent their lives dedicated to these rights; but it still leaves feminists no position to say or agree with any statement like this.

Please don’t get me wrong – I personally, absolutely appreciate everything I have and why I have it. Feminism comes in many different packages and as I explore them more I’m always finding new things to be grateful for. But as a high spirited, driven group of women and men fighting for the continued rights of women worldwide, our efforts, and the efforts made by those before us will probably be taken for granted by many.

The ‘father’ of the US constitution, James Madison said, ‘I may disagree with everything that you say, but I shall defend to the death you’re right to say it’, and in the same way our approach to the constant fight for equality must be of fair mind to allow for the fact that some people just won’t appreciate the rights they have, that other’s have fought for.

But you don’t fight for human rights only to receive a pre-formed level of appropriate appreciation in return, do you?

The beauty of the feminist movement is that we are fighting for women to have the right to choose their own pathways and what they want to do with their lives. Although it’s not the way that I would show my appreciation, or lack thereof, what I’ve learnt, as I do more and more each day, is to distance myself from the controlling behaviours that can be so easily slipped into; especially in heat of the moment when you’re so desperate for change and acceptance that every word you speak with every breath you breathe is at the highest level of passion.

Because the harsh reality is that it’s not my place, and it’s not your place either.

What do you think, Lipsters? Do we owe our feminist foremothers anything? Are there any values you think are inherent to feminism?

6 thoughts on “Feminism: Fighting for the right of women to disagree”