feminist of the week: clare welsh 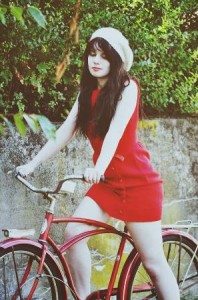 Describe yourself in one word:
Brimming

What is your feminist philosophy?
Women’s rights are human rights. We cannot help the sex we are born with any more than we can help the colour of our skin. That some people should be given advantages while others denied these advantages because of an arbitrary physical trait is not fair to anyone involved – it dehumanises the oppressed while condemning the privileged to a state of ignorance.

Why is feminism important in today’s world?
In times of war, women are overwhelmingly the victims of sexual violence – and today’s world is defined by war. Feminism is important because it teaches non-violence. It teaches healthy models of love and respect.

What is the most important feminist cause in your life?
In my life, it would be teaching to combat the female beauty standard put forth by a Capitalist culture that profits from belittlement and insecurity. I do not think that this standard is a lie; rather, that it is incomplete because it is but one truth, one beauty that, propped up by billions of dollars, casts a shadow on all other beauties, rendering them ugly by comparison. I’ve seen too many girls and women – myself included – kill aspects of their Self so that this one standard can live in their shell. This killing is not okay. The United States needs a more complete visual language.

When did you have your feminist awakening?
My parents are writers. Aware that they were raising daughters, they included a range of female characters in their bedtime stories. I still remember the one about a girl who is given no other name than “the poor farmer’s daughter.” At one point, the farmer’s daughter leaves the only home she’s known to adventure with a polar bear. The bear asks her, ‘Are you afraid?’ ‘No,’ she says.

I was by no means a brave child. But the fearlessness of the farmer’s daughter stuck with me. Who knows if she was really afraid? Perhaps she was lying to seem stronger than she was. Whatever the case, the story taught me to hold my own in the face of uncertainty; and as an inhabitant of a culture that is constantly telling me to be more like one kind of woman and less like myself, I often call on the story of the farmer’s daughter as a means of centering myself.

What would have to change before men and women achieved true equality?
This is ancient philosophy, but bear with me: I believe that a decrease in materialism would lead to a decrease in objectification. If we put more value on the character of a person, and less value on the trophy they represent, we would all see each other a lot more clearly.

What’s your advice to other feminists?
Don’t be afraid.