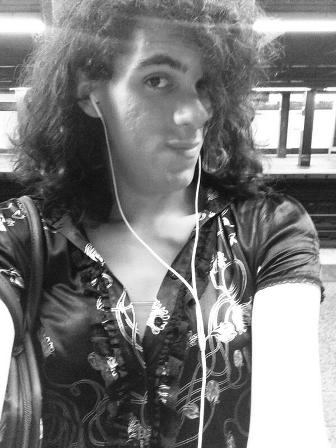 Describe yourself in one word: Tenacious

What is your definition of feminism?
Equality. Feminism should be about equality and pulling the underprivileged women (regardless of race, sexual orientation, or trans-ness) up to the same playing field that cisgender, white men have in our world. It boggles my mind how we live in the era of globalisation and a black woman born next door to a white woman is already under so many social stigmas before the umbilical cord is even cut.

What is your feminist philosophy?
All human beings are equal, and all people are free to do as they wish unless they are harming others in some form.

When did you have your feminist awakening?
This is a tough question… I’ve always felt that people are equal to one another for as long as I can remember. The notion of some race, culture or gender being superior to another is pure ignorance. On the other hand, I wouldn’t say my feminist awakening occurred until a few years ago when I began my transition. I wouldn’t have dared describing myself as a feminist prior to transition.

Is feminism important in today’s world?
Absolutely. The current world view is a very masculine, male-dominated world view in almost all societies. The competitive, aggressive nature of this sort of masculinity has left us with a history of war and violence… I think we can do better than that.

Can men be feminists? In what way?
I don’t know. I view it the same way as I view allies in the sense of queer politics, or racial issues. Members of the dominant group can support, and should support, the ideals of the other group, but need to listen when oppressed people speak, and not be in such a hurry to go ‘Not all X people do this…’

What does the feminist movement look like in your eyes?
It looks like a mess, sadly. White feminists have different interests and goals from Latina and Black feminists, and some feminists want to exclude transgender women, others want to welcome us with open arms. All feminists have been vilified, though, by the media. It has become a toxic label, similar to how the words “liberal” and “socialism” have been tainted in America. These aren’t bad things. Media has just done an excellent job of pushing anti-feminist views and fracturing the movement.

Is it acceptable for transgendered individuals to consider themselves feminists? (Why or Why not?)
Absolutely. Every individual can, as every individual is in some way restricted by the entrenched cultural gender standards.

How has social media helped the feminist cause?
It definitely has raised awareness of feminism if you know where to look. Legally or not, so much literature is easy to access for little to no cost.  Also, places like Tumblr can be a wealth of resources. It also allows for a quick dissemination of news.

How has feminism affected you?
Far too many ways than I can count, but I’ll point out the obvious. The roles of women are different from what they were back when my mother was born. While we are still fighting to remove the wage gap (which is insane), the era of the June Cleaver housewife is dead and buried for the good of everybody. Women aren’t expected to cook a three course dinner in a pearl necklace, tight dress, high-heels, and those horrible yellow gloves. That said, we need to push further. Within the Latino community at least, we are still plagued by the dominant macho narrative and ideas of how women should look, dress, and behave. It is damaging to our girls, whether or not they are transgender.

Do you think that feminism has a branding issue? If so, why and how do you suggest the movement can fix it?
Yes. I don’t think there is a true feminist movement, though, to be honest. I view the feminist movement similar to how I view the transgender community in the U.S. – a fractured mess. There are so many different groups with different goals and getting them all together is impossible. There are different problems and goals for the twenty-something white feminist on a college campus, and the Latina feminist on the same campus as her. I know for some transgender women, feminists come off as scary thanks to transphobia in some sections of the movement… so to fix it, I really can’t offer suggestions.

What is the most important feminist cause in your life?
The images and goals expected of Latina women in 21st century America. A lot of Latinas are stereotyped as vixens like, Sophia Vergara or Eva Longoria, and told to meet impossible physical standards, while expected to be the perfect wife. We’re expected to be thin, curvy, great cooks, and then scream “ay, papi” in bed. It is insane. It is impacting body images, and turning the average Latina into a fetish for others.

What does the future of feminism look like?
I honestly think feminism is going to continue as it is for a while, with different groups going after different goals. I expect to see transgender women welcomed into feminism as powerful women such as Janet Mock and Lavern Cox grow in the public sphere, but outside of that… I’m not sure. There needs to be solidarity with feminists of color though – we are all stereotyped and it affects our children. Black, Asian, Latina, Native, etcetera.

What’s your advice to other feminists?
Fight for hearts and minds. I hate to quote a phrase from an imperialist conflict such as the Vietnam War, but it needs to be done. Feminism is viewed as toxic by so many, with the image of bra-burning, “men hating” angry women. It isn’t this. Feminism needs to be reclaimed from the media and those afraid of it, and shown for what it is – an alternative to the blunt club of masculinity and machismo, offering equality for all. This is not a bad thing.

One thought on “feminist of the week: elaine rita mendus”