feminist of the week: hannah guyon 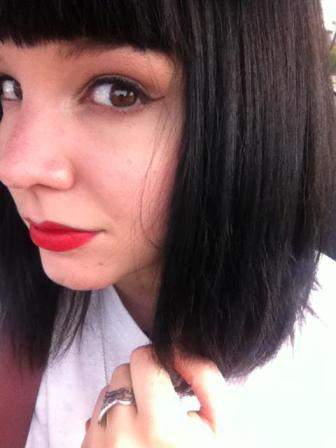 Describe yourself in one word:
Determined

What is your feminist philosophy?
I believe in celebrating women and the major strides that strong women all over the world have made, and are making, both big and small. My biggest desire is for women to be able to have the choice, both politically and socially, to behave how they want, dress how they want, and lead the life that they want to live. Everyone should be recognised as equals because oppression is all connected.

Why is feminism important in today’s world?
Feminist issues abound in today’s world: From access to contraceptives to domestic violence issues, rape culture, street harassment, body image, and more. The feminist cause is still very globally relevant in the 21st century.

When did you have your feminist awakening?
I was about 16 when I was given some feminist literature from an older girlfriend of mine. She helped open my eyes to the importance of bonding together as a female community in order to understand society through a feminist lens, and learn how to traverse it, and perhaps subvert it, through discussions and awareness.

What would have to change before men and women achieved true equality?
Politics aside, I think the most important thing is how future generations are raised to think. Girls and boys are treated very differently as they grow up, both at home and in the education system. They are also educated in a certain way through the media. Those raising boys and girls should not impose gender stereotypes on them – colours, toys and behaviours chosen specifically according to gender – but allow for them to freely branch out in whatever direction they like. Children should be raised with equal respect for all others, and the freedom to grow up uninhibited by certain expectations placed on them due to gender.

Why should men take up the feminist cause?
Feminist rights are human rights. Gender expectations can negatively affect men as well.  Some experience the pressure of hyper-masculinity and a restriction from vulnerability. It is important for men to be educated on feminist issues, and to just be aware of how they act towards the women in their life. Are they being fair, kind, and respectful? These are questions we should ask ourselves in general, because all humans deserve to be treated with respect.

What’s your advice to other feminists?
My advice is to always remain informed and aware of what’s going on around you, socially and politically, and to not be afraid to speak up. It’s important to keep an open dialogue, and push for what’s right. I think it’s also a good idea to think outside of your own country – make yourself aware of women’s struggles in other countries and cultures.