feminist of the week: suzanna bobadilla 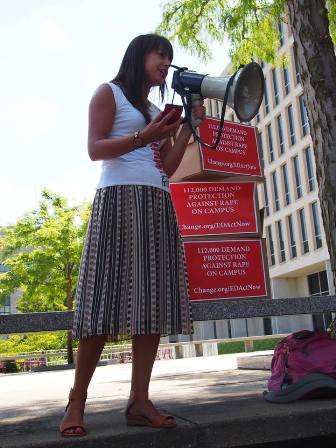 Describe yourself in one word:
Enthusiastic

What is your feminist philosophy?
Hard to sum up in just a few sentences, my version of feminism is one that combats misogyny through building community across coalitions of different racial, gender, sexual orientation, class, and national identities. I believe that it is incredibly important that feminism addresses not just the concerns of white, upper/middle class, straight women and takes a hard look on how feminist issues inherently includes fighting different forms of oppression.

Another characteristic of my feminist philosophy is implementing it throughout my daily life. I learned about feminism in a very tangible way, so I admit that I personally am not too comfortable with using the language of feminist theories. I find that it can alienate people whose experiences don’t include vast amounts of academic training.

Instead, I try to focus on language by asking friends and family not to use misogynistic language around me, like “bitch” and “whore/slut” etc. Do I think eradicating these words automatically means eradicating gender oppression? Not necessarily, but I do think that my friends are more conscious about why they use those words and perhaps that’s one step forward.

When did you have your feminist awakening?
That’s a great question! My mum was definitely my first feminist in my life. She came from a family of four daughters, who had three more daughters, so it would have been hard not to have been raised in such an empowered household. Feminism just slipped into my lexicon at a very early age.

My family and I have this great story where I was sitting in the back seat of my friend’s car, returning from basketball practice. Evidently, I simply stated, ‘I’m a feminist.’ My teammate asked me what that meant and I said, ‘It means that boys and girls can do the same things.’ She said that sounded pretty cool, and she became a feminist as well. According to my mum, my friend’s dad looked in the rear-review mirror, equal parts entertained and alarmed. I guess that would be the beginning of my feminist career.

Why is feminism important in today’s world?
I would love to live in a world where people, regardless of gender and gender expression, are free to engage in all life opportunities (such as education, leadership positions, starting families). I don’t think we’re there yet, and that’s why feminism is still crucial. It’s a huge tool in our toolbox to help us create greater progress.

What are you doing to further the feminist cause today?
Currently, I’ve been contributing pieces on/about feminism to this online platform called PolicyMic, working with a group of activists to end sexual violence on college campuses, and writing/researching about my grandmother’s 1938 honeymoon when she drove from Boston to Buenos Aires. (At 97, she’s the original BAMF).

What is the most important feminist cause in your life?
Recently, I’ve been getting involved in anti-sexual violence work, especially at college campuses. The fact that one in four college women are the survivors of sexual violence deeply troubles and disturbs me. There has been a lot of energy around this movement across the country and I’m hopeful that we can prompt change not only in higher education policies, but a culture change amongst our peers.

Can men be considered feminist? Why should men take up the feminist cause?
Absolutely! I believe that people of all genders can be feminists as feminism touches on issues that are societal wide. It’s great to see people of different identities form coalitions that stand in solidarity with a cause. Especially in the area of anti-gender violence work, it’s critical that those who are the perpetrators (overwhelmingly male) recognise how the conversation is shifting from “Don’t Get Raped” to “Don’t Rape.”

Do you think that feminism has a branding issue? If so, why and how do you suggest the movement can fix it?
Ah yes, the “I’m not a feminist but…” issue as I like to call it. Recently, I think there have been great strides about reclaiming the word “feminist,” especially amongst the millennial generation. For example, at Harvard, we continue to have a vibrant “Feminist Coming Out Day,” where students of all genders offer testimonials about why being a feminist is important. Additionally, you see blogs like Feministing continue to thrive and its always wonderful to see Internet gems like Twitter’s Feminist Taylor Swift.

As a History and Literature major, I do believe that using particular vocabulary like “feminist” is helpful to easily express one’s political and personal beliefs. But at the same time, I do understand why some people have a hard time with the word. In the past, those people who had strongly identified as feminists also excluded people who were of different racial identities, sexual orientations, and gender identities. Also, some people just really dislike political labels.

From my perspective, I think it’s okay to have people who don’t agree on the term. If you understand the importance for gender equity, call out injustices when you see them, and actively work to improve society around you, and you’d like to define your work on your own terms – that’s perfectly fine with me! In fact I think it’s awesome!

What I do have a problem with is when people roll their eyes when I say that I’m a feminist or immediately try to tell me to stop “bitching.” Something that usually works for me is to calmly smile and express my disappointment at their immaturity. Their reaction is always amusing. But if it’s been a long enough day, I’ll just roll my eyes back and send them my “You want to try that again?” look.

B. Obviously, she’s done so much more than that, as my first example of a badarse feminist. My mum taught me the core of my personal branch of feminism – empathy. When I was little, I used to be so embarrassed by how she would chat with anyone in the grocery line/bathroom line/waiting for the train; she can actually start and continue a conversation with anyone. Now, I think it’s incredibly awesome and demonstrates her ability to connect with people on a personal level in only a few minutes or less.

Also, it shows how she values others’ personhood. Not only will she chat with people, but she’ll carry their stories with her, swapping them with our family or the next new friend she makes. For me, this is a key essence of social justice work – being approachable, listening to strangers’ stories, and cherishing their contributions to this world.

C. She’ll never hesitate to goof around with our family and dole out affection/advice.

What’s your advice to other feminists?
Hone your sense of humour. Be sure to hang out with people that you love and who make you laugh. Life’s more enjoyable that way.

One thought on “feminist of the week: suzanna bobadilla”