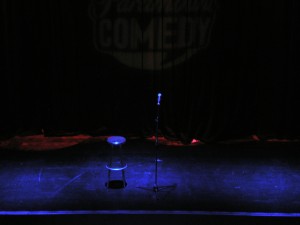 Can feminists be funny? Of course. Feminism is the belief that men and women should have equal rights and opportunities. That’s the dictionary definition. Here is a list of awesome people who are two of my favourite things: advocates of gender equality and who are fucking funny. Oh, and they’re not afraid to drop the f-bomb: feminist.

Amy Poehler – ‘Girls, if a boy says something that isn’t funny you don’t have to laugh.’

Amy Poehler: comedian, actor, writer, producer and all round inspirational human being. When I feel sad, I google Amy Poehler quotes. Her book, Yes Please, is filled with pearls of wisdom that are delivered with honesty and humour. Amy is a champion of women and women supporting one another. Her web series Smart Girls at the Party has now blossomed into a website that celebrates the achievements of girls, all achievements big and small. With the motto ‘change the world by being yourself’, it provides a healthy, positive and fun example for girls. Amy’s party is definitely one I want to attend.

Tina Fey was the first female head writer for comedy institution, Saturday Night Live.  Her show, 30 Rock, made television funnier and smarter and won a bunch of awards including six Golden Globes. After watching her latest series, The Unbreakable Kimmy Schmidt, I can’t stop thinking about the line ‘I’m always amazed what women will do because they are afraid of being rude’ delivered with perfection by The Today Show host, Matt Lauer. This line sums up Fey to me. She is ridiculously smart and sharp and she doesn’t have time to waste pleasing people because she’s too busy being a boss. In her book, Bossy Pants, there’s a chapter called, Dear Internet, where she takes on some anonymous internet trolls. Check it out for a laugh and definitive proof that you don’t take on Tina unless you want to get schooled.

Mindy Kaling – ‘Why the fuck not me should be your motto’.

Mindy is a woman who makes her own opportunities, kickstarting her career by writing the play, Matt and Ben, with a friend in college. She played the role of Ben Affleck in the play which hypothesised that Affleck and Matt Damon didn’t write but instead found their Academy Award winning screenplay, Good Will Hunting. Hilarious. This got her some attention as a writer and she was hired on the US Office at the tender age of 24. She now stars in her own show, The Mindy Project, hiring men and women who are feminists like her: ‘I would wager that only a masochist sexist would want to work at a show with an opinionated female lead and showrunner. So I work with people who love women. That’s a nice thing.’

Amy Schumer – ‘Look men, you are not penetrating our vaginas. We are engulfing your penises.’

If you haven’t seen it already, check out The Amy Schumer Show. Schumer is fearlessly funny. Her comedy is all about being a woman.  It is personal but what she explores is universal – because we all struggle with existence, right? She gets out in front of topics like body image, sexuality and stereotypes. She is as self-deprecating as she is confident and celebratory. I am looking forward to Trainwreck, which Schumer wrote and stars in. Directed by Judd Apatow, it’s the story of a commitment-phobe who falls in love. We’ve seen this story before but usually the girl doesn’t get to be complex or comedic. So, if you like your female characters real and exciting, Amy Schumer is a woman to watch.

Bill Hader – ‘If a guy doesn’t like a funny girl, there’s something wrong with him.’

Bill Hader is the token man on the list. He represents all the men out there who are funny feminists. There is only one man on my list because men tend to be a little less outspoken about this stuff. But in my research I found some great support from all sorts of funny men like Seth Meyers and Andy Samberg – who like Bill Hader are SNL alumni. I guess it’s no coincidence that they all worked with incredibly talented, strong and funny women. Hader’s impressions and characters are so well observed and funny, with his humour paralleled by legitimate acting. Check him out in The Skeleton Twins with Kristen Wiig to see these funny people be amazing in dramatic roles.

Sarah Silverman – ‘Mother Teresa didn’t walk around complaining about her thighs – she had shit to do’.

Being outspoken, confident and opinionated are all qualities I admire, qualities Sarah Silverman possesses. I once heard her describe her comedy persona as ‘arrogant and ignorant’. Behind this version of herself she deals with controversial subject matter and tackles big subjects like race, religion, politics and sexism. She often shocks and offends – usually when she’s calling out prejudice in society by ironically engaging in it. She’s a divisive comedian with a lot to say. She likes to push the envelope and never apologises for it. I love her abrasive comedy style. It won’t be for everyone, but like she says, ‘I never defend my material. Comedy is subjective.’

Chelsea Peretti – ‘Instead of complaining about my tweet how bout u just do a good one that u like.’

Chelsea Peretti’s latest stand up special is called One of the Greats and she is. She owns twitter, she’s the queen of emojis and her podcast Call Chelsea Peretti is so weird and funny it makes you want to be her best friend. She hangs up on callers on a whim, is always hoping for a listener to tell a great story featuring a bear and uses homemade sound bites. She’s a writer whose credits include Parks and Recreation and Kroll Show. Her stand up is varied and even the cutaways to the audience are surprising. In this special she muses that it’s frowned upon for a female stand up to joke about her period but if men bled from their penises monthly that’s all they’d talk about. If you’re not familiar with Chelsea, look her up… maybe even give her a call.

There are way too many people to add to this list but I have to stop somewhere. Oh, wait. No I don’t. If I were to continue the list I’d include Ilana Glazer and Abbi Jacobson, Ellen DeGeneres, Megan Amram, Wanda Sykes, Lena Dunham, Kelly Oxford, Jenny Slate and every single one of my friends. But I’ll stop now. And go watch Broad City and laugh and be inspired to write and laugh some more.

One thought on “funny feminists”