gok wan is all about your “assets”. are you offended? 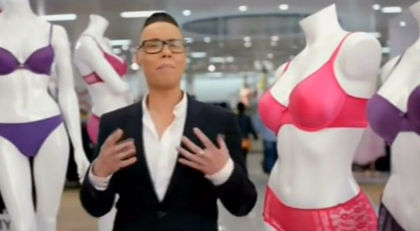 Department store Target is copping it for its new advertising campaign featuring the fabulous British-Chinese TV fashion guru, Gok Wan. The particular advertisement causing such criticism is a bra ad in which Wan states that if you have a bra professionally fitted (at Target), ‘your bangers will never feel more loved.’ (Bri-ish accent for effect).

I’ve got to be honest: the first time I saw the ad, prior to these recent complaints, I was slightly taken aback. BANGERS!? Can they say that on TV? Is that something that people even call breasts/boobs/tits/jublies/chesticles/lady-lumps?

Well, that’s what Gok calls them (he even has his own range of bras called ‘Banger Boosters’), and it’s upset quite a few people. But if you look closely at the general themes of the complaints being made, there is an underlying homophobia that is arguably the true gripe these critics have with Wan.

The complaints to the Advertising Standards Bureau say things along the lines of: ‘Who on earth calls their breasts ‘bangers’ and why do we have to watch an obvious gay man talking about women in this way? It is insulting.’ ‘A female body is a beautiful thing, not to be cheapened by a poofter calling breasts “BANGERS”!’(Emphasis mine).

It’s a whole world of crazy, most of which just comes down to backward, homophobic ideas that openly homosexual people should not be visible in the public eye. Sorry, I wasn’t aware this was 1953.

What are we to make of all this as feminists? Many of these complaints hinge on valuing and respecting women’s bodies, which is a key part of feminist consciousness and action. But in this case, these conservative, homophobic bottom feeders are using women’s bodies as a moralising excuse to target (sorry) an openly gay man.

There seems to be a few levels of homophobia and sexism going on. Not only are these arguments paternalistic (how DARE he insult/cheapen/degrade OUR women!?) but they are also homophobic and sexist towards Wan as a homosexual man (how DARE he show his beautiful cheekbone-d, gay face in public!?/how DARE he help women with their bodies, what does he know!?)

Flamboyant gay men have been abundantly troped as the postmodern/post-feminist girl’s best friend in pop culture, but does that mean that in reality they all essentially want to help us organise our wardrobes/tell us if our hair looks nasty/gossip over brunch? Is there some kind of spiritual link between gay men and straight women?

I’m not going to make an argument either way, as neither straight women nor gay men can or should be homogenised in any way, but I will argue against these criticisms that gay men have no right to talk about or help with women’s bodies/fashion. As a woman with an irrational aversion to trying on clothes in department stores and/or getting a bra fitted, subsequently having always worn bras that were comically ill-fitting, the message of Target/Gok’s ad is positive for me. Sure, I obviously disagree that breasts are a woman’s biggest “asset” – I like to think things like, I dunno, positive social characteristics are more beneficial and important – but on the whole, I’m happy that Target is promoting a positive body image.

I’m also very happy with Target’s response to the complaints about Gok, which I will leave you with, because it will make your day:

‘Gok Wan was chosen as a brand ambassador for Target because of his personality and reputation, not his sexuality. He feels good about who he is as he is. He is playfully irreverent, colourful and fun. He has a great capacity for making other people feel good about themselves too. Target strongly believes that a person’s sexuality is irrelevant to their worth as a person. Target makes no apology for using a gay man in its advertising and we do not believe that this should be grounds for upholding a complaint.’ <3

Do you find the word ‘Bangers’ offensive or derogatory in relation to women’s breasts? Let us know in the comments!

5 thoughts on “gok wan is all about your “assets”. are you offended?”