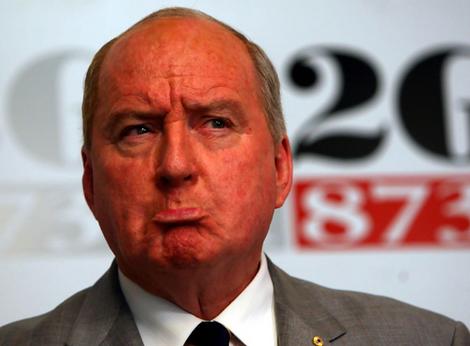 Just when you thought you’d escaped all the Alan Jones articles, I’ve tricked you into reading another one. Don’t worry, I will spare you the bazillion reasons why I would rather listen to Pearce Bronson singing whilst running his nails across a chalkboard than to Jones any day. What I will say though is that Jones isn’t our biggest problem…we are. OK, so that’s a tad OTT but I’ve always had a flair for melodrama.

When discussing the government’s commitment of $320 million dollars to improve opportunities for the political, economic and social advancement of women in the Pacific, Jones stated ‘…Women are destroying the joint…’ Well feminists had the last laugh, taking to social media and the interweb to encourage one another to do just that- destroy the joint. A petition was created on Change.org calling on ‘all companies who advertise on 2GB to publicly distance themselves from Alan Jones’ latest sexist tirade, and to make a contribution to furthering gender equality as a sign of support.’ It took over four weeks to obtain 15,880 signatures.

Cut to September and speaking of Julia Gillard’s father, Jones said, ‘The old man recently died a few weeks ago of shame.’ Another Change.org petition was created, urging people to sign in support because ‘…There is absolutely no justification for attacking someone’s loved ones and disrespecting their grief to score political points. Companies should not be supporting these ugly, hateful attacks — advertisers should withdraw their support from Alan Jones’ program immediately.’ It took only 9 days for 111,316 people to sign the petition.

The Jones debacle has opened up debate regarding freedom of speech and more recently, cyber-bullying. What I want to highlight though is the value (or rather lack thereof) that people have placed on his remarks. The second petition averaged 12,368 signatures per day compared to the first with 567 per day.  In total, the second has received over seven times as many supporters. Plus even if everyone who had signed the first petition signed the second, 95,436 other people still supported the latter. But does it matter which petition was signed just as long as the job gets done? Well yes, actually, I think it does.

Now I don’t know the tactics behind each campaign, so you could probably find an argument there, but I’m not writing a research paper. At this stage wild speculation and social commentary will suit me just fine. Jones’ comments regarding Gillard’s father were certainly unacceptable and repulsive but they did not act in a way to overtly promote sexism.  People definitely seemed to pay them more attention though.

The reality is that many people don’t really care about sexism or acknowledge its existence. Hearing a sexist comment is like watching a movie where someone gets shot point blank in the head. Not worth a flinch as it’s not nearly grotesque enough and we’ve seen it all before. Australia has become desensitised to misogyny. Time and time again, Jones has made both flippant and deliberate remarks aimed at degrading women yet it has taken his tasteless comment about the PM’s dad to create public outcry. An outcry which has resulted in the Macquarie Radio Network suspending all advertisement during Jones’ program until they figure out an escape plan.

So do I care about sexist remarks made by a radio shock jock whose target audience probably doesn’t run in my social circle? A little bit. Do I care about our reactions to these types of comments and the people that make them? Most definitely. But alas, it seems that sexism just really isn’t sexy anymore.

(NB: stats are approximate as of Monday 8th October 2012)

One thought on “hawk eyed feminism: let’s talk about sex(ism)”