in brief: is this new renault ad sexist? you bet! 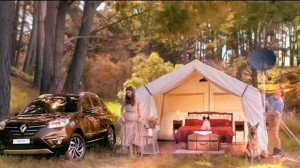 Just when you thought it couldn’t get any worse for sexism, here comes Renault rolling in with their new ad for Koleos which features the tagline: ‘Beautiful meets Capable.’ The video has everyone asking; is there sexism at play here?

Hell yes there is.

The ad is a short snippet into the life of a couple as they fall in love with the new SUV. The man is indeed capable (he can pick up armchairs, go fishing and drive the car) and the woman is indeed beautiful (she picks flowers, cooks the fish and feeds her man all whilst looking divine).

And that’s just it – the sexism here is too easy to spot. It is a classic housewife/working man scenario. However, viewers of the ad who saw the campaign brief have commented that the ad is ‘charming,’ ‘cute’ and ‘funny.’ Thankfully, YouTube viewers are a little bit smarter, with one viewer stating ‘This is so sexist it made me feel physically ill.’ Yep, I agree.

I saw the ad originally as print and it pictured two dogs, a rough German shepherd and a cute little terrier with a bow in its hair, and the sexism did not come through for me then. However, with this video, the ‘Beautiful meets Capable’ slogan fully commits to the delicate woman/strong man stereotype. Effie Mann of Daily Life asks ‘are we just so accustomed to subliminal gender stereotyping in advertising that we’re immune? Either way, you’d really think by 2013 we would be a little more enlightened.’

You’d think so, yet here we are, still being fed ads and content that feature women as incapable and men as un-beautiful.

Have a look at the ad and make your own decision, however I’m betting it will be pretty similar to mine.

One thought on “in brief: is this new renault ad sexist? you bet!”