in defence of regifting 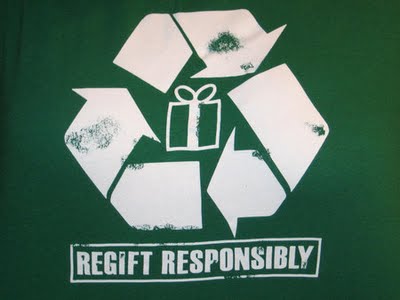 Image via The Crafty Woman

If, like me, you rolled out of bed on Boxing Day with a ham hangover and fell into a pile of wrapping paper and gifts that you don’t want, then I may have a solution for you: regifting.

Regifting is basically a type of recycling. To regift, if you’d like the Merriam-Webster dictionary definition, is to ‘give someone a gift that was previously received by someone else’. The term was popularised by the Seinfeld episode ‘The Label Maker’. In the episode, Elaine calls Dr. Tim Whatley a ‘regifter’ after he regifts a label-maker to Jerry, which was originally given to him by Elaine.

The process of regifting is often viewed as cheap, impolite and tacky, but it is becoming more and more common. American retail website Bookoo.com conducted a survey that found that 92% of participants believed it was acceptable to regift and over 87% believed they had been on the receiving end of a regift. More than 62% planned to regift over the Christmas period. America even has a National Regifting Day, held each year on the Thursday before Christmas.

I am happy to admit that I am a serial regifter. I don’t see it as miserly. Instead I’d argue that it is financially savvy (I’m a poor young casual worker after all), as well as environmentally friendly (I don’t want to clog up landfills). And I do put a lot of thought into regifting just as I would with any other gift – I’m not just dumping crappy gifts onto other people. Think of it like this: regifting is like finding a better home for an item where it will be enjoyed, appreciated, and treasured.

Regifting is nothing to be ashamed of, but there is a proper etiquette involved.

So here are my do’s and don’ts  for regifting:

1. Don’t be a dick. Regifting isn’t an excuse to give away your shit – that’s what Ebay is for. The item you are regifting should be reasonably new and unused. If it is broken, smelly or covered in dust then it’s not suitable. You wouldn’t want to receive someone’s used sneakers would you?

2. Don’t regift handmade or personalised items. For example, you can’t regift a book if it has an inscription revealing the original recipient. You can’t regift the papier mâché elephant your niece made you. But there are some exceptions. If you received monogrammed towels and your initials are ‘JJ’ and you happen to have a friend, neighbour, or work colleague who has the same initials then go right ahead. Regift those bad boys.

3. Do put some thought into a regift. Regifting gets a bad rap because people think it’s just about getting rid of unwanted gifts. But a regift should be done with care. Make sure the item will actually suit the person you’re giving it to. Don’t regift something that won’t be appreciated and enjoyed.

4. Do make it look good. I’m all for recycling wrapping paper but take some care in the presentation of a regifted item. Wrap it up neatly and write a nice card. Don’t use ripped wrapping paper or sticky tape that has lost its stick and is covered in dust and hair.

5. DON’T GET CAUGHT. This rule is implicit but worth underlining. The main trick is to remember who gave you the gift in the first place. There’s nothing worse than giving a regifted item back to the person who gave it to you originally.  Also avoid regifting to someone who knows the original giver. If Friend A is wearing a regifted bracelet that was given to you by Friend B and then Friend A and Friend B hang out, you are in big trouble.

6. Do have a good excuse if you get caught. ‘Look, Friend B, I really appreciated the bracelet you gave me. It was so thoughtful of you and it was totally me. But Friend A admired it once and told me how it reminded her of her long-dead beloved grandmother. She tried to find one similar but couldn’t so I thought I would gift it to Friend A in honour her dead grandmother. Anyway did you like the papier mâché elephant I made for you?’

One thought on “in defence of regifting”