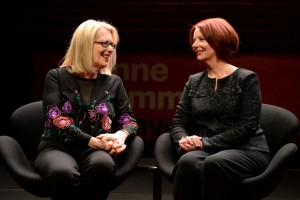 When feminist author Anne Summers announced she would be conducting two events in conversation with Julia Gillard, one commenter responded, ‘this will sell out faster than a Pink concert!’ They were right. In a testament to the deep esteem in which many Australians hold Gillard, both events sold out within hours.

Since losing office, Julia Gillard has largely maintained a dignified reticence. She offered a few understated tweets on the day of the election, congratulating the Coalition on their win and commiserating with her former Labor colleagues over their loss – ‘My thoughts are with you all.’

One week after the election, she published a lengthy opinion piece for The Guardian, reflecting on the legacy of her government and delineating the challenges facing Australia over the next three years.

Aside from these instances, however, Gillard remained resolutely out of the public eye, until this week.

On Monday, her conversation with Anne Summers at the Sydney Opera House was broadcast live by the ABC. On Tuesday, the two women spoke before a sell-out crowd at the Melbourne Town Hall.

It is fitting that Gillard’s first post-prime ministerial public appearances were with Summers, the doyenne of Australian feminism and one of Gillard’s staunchest defenders. Summers’ 2012 book The Misogyny Factor was an examination of the insidious encroachment of sexism and misogyny on Australian politics and society, and was in large part a response to political and media treatment of Gillard. In any other workplace, Summers claimed, Gillard ‘would have a case for sex discrimination and sexual harassment’.

There is clearly a great deal of mutual respect between these two fierce, intelligent and uncompromising women. Summers pulled no punches as an interviewer, explicitly addressing the extensive misogyny aimed at Gillard.

‘You were treated appallingly,’ Summers said. ‘You seem to be at peace with it. Are you?’

Gillard laughed. ‘I think I am at peace with it. There’s a decision to be made – do you carry it around with you for the rest of your life, or do you let it go?’
Gillard admitted that the passionate international response to the misogyny speech took her by surprise. ‘I didn’t feel the wider power of it in the moment… It was only in the days and weeks that followed, that I realised its impact. That speech was for every woman who’s ever bitten her tongue and thought, “no, I won’t say anything” – that one was for her.’

Gillard said she was astonished by the media’s relatively benign reaction to the now-infamous “Ditch the Witch” sign. ‘If it was a sign directed at the first Aboriginal PM,’ she said, ‘with a racial term rather than a gendered one, imagine the different reaction.’

Throughout the interview, Gillard was warm, expansive and gently humorous. Her responses were always thoughtful, and she seemed to welcome the chance to discuss topics outside of traditional political discourse.

During audience question time, an 11-year-old girl asked earnestly, ‘After all the sexism and misogyny you received, I just want to know did you have any fun being Prime Minister?’

Gillard replied, ‘I’m having fun now knowing that my prime ministership has taught a girl your age the word misogyny, that’s amazing… It was tremendous fun, I had lots of amazing experiences.’

When asked if she had any advice for the new Prime Minister for Women, Gillard was circumspect. ‘Tony Abbott needs to do an enormous amount of listening. I hope that he finds it the most enriching experience of his prime ministership.’

Gillard appeared calm and very much at ease, even as she defended some of her less popular policies and views: asylum seekers; the sole parent pension; same sex marriage; carbon tax. She made some slight concessions: ‘I worry about the tenor and tone of the asylum seeker debate,’ she said. ‘It’s a complex argument. There’ll never just be an answer. It’s not that kind of issue.’ She reiterated that in her post-political life, she hopes to make a continuing contribution to promoting the safety of women and girls globally.

The crowd were rapturous, with lengthy standing ovations, thunderous applause and wolf-whistles accompanying Gillard’s entry and exit. There was something particularly charming in seeing a woman who has endured personal attacks with unceasing dignity, finally facing a room full of people thanking and honouring her for her achievements and contribution. Gillard’s broad smile as she left the stage spoke volumes. Despite the vitriol and the many trials she faced as PM, she has evidently chosen to ‘let it go’, as she looks to the next stage of her personal and professional life.

3 thoughts on “julia gillard and anne summers in conversation”