kill pill: part fifteen – they shall not pass 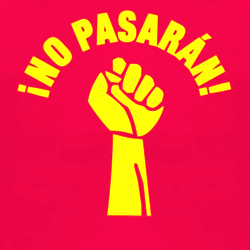 Original image via Kustom Tees 4 U

There is a man following me. In order to make sense of this, I’ve decided to ornately frame it in the context of killing pill. Because it seems a lot of power comes with having a female form. And reopening the part of it that can create and give birth has unearthed a wild, manifesting force.

Wherever my thoughts go, energy moves very quickly. When I choose to care for myself, magic happens. Job opportunities reveal themselves, helpful people enter my orbit and a sense of community, rather than competition, feels like an absolute reality. My days aren’t filled with to-do lists and my nights aren’t filled with worries. Well, that’s not entirely true. When you have a man following you it can lead to some sleepless nights and/or dreams that feature glowing, wide-eyed Indian women who tell you to be careful because their bruises came from him.

So amidst the magic, I’ve physically manifested my most primal fear: the damaged masculine, the disempowered man, The Troubled One. And what does he want? To objectify, to abuse, to violate, to invade, to numb, to destroy, to start a war, to be let in. A book I’m reading called Body of Wisdom by Hilary Hart compares the constant objectification of the female form to patriarchal society’s abuse of Mother Nature and her resources: ‘In a world that values heaven and the abstractions it fosters, connection to the earth has kept women in a back seat. In a secular context, this continual conscious and unconscious devaluation has supported the abuse of women’s bodies as a subcategory of the abuse of the earth’s resources. The objectification of all things earthly contributes to the objectification and sexualisation and the use and abuse of women.’ Not on my watch.

There’s a man of about 30 who’s a chef at the diner next to where I work. He walks a lot and is red in the face. He wears a hooded jumper and occasionally a bandana over his face. Some think there’s a battle with drug addiction going on, others have suggested mental ill-health. My boss said he’s one of the “troubled ones”: someone who grew up in this town, never left, and has never been saved. Whatever it is, the first time I saw him – pre-killing pill – I was scared.

I’ve felt this kind of fear before. Everyone has, it’s probably a rite of passage. Maybe it’s a friend, too, because it preceded a man chasing me down a Melbourne street in the middle of the night. It came weeks before a chef sexually assaulted me where I was working. I felt it when I slapped a man in a club after he grabbed my vagina from behind me, between my legs. It came before a male masseur groped me. It appears when I pass the Troubled One walking into town.

Walking home one day I saw Troubled One had stopped at our front gate, with his back turned to me. Coincidence? I’ll never know. But my boyfriend wasn’t home and I felt too frightened to go inside. I also didn’t want him to know for certain where I lived, so I went into the neighbour’s for an hour praying that he wouldn’t still be there when I came out. Thankfully, he wasn’t.

Then he started coming into where I work wanting to know random things about resin before asking me what my name was and when my birthday is. Once he came in and out of the shop so many times in one hour that a customer observed he was “crushing” on me. Even the policewoman I spoke to last week after Troubled One confessed he’d knocked on the door of my home said with a twinkle in her eye that he must “like” me. Oh, great. I’m so flattered by this unpredictable, space-invading Neanderthal’s affections that I won’t worry for my physical safety. Silly me, he just has a hard-on, so I shall bow down and respect it regardless of how it makes me feel. I mean, come on. He’s seen me around town with my boyfriend. I know because I’ve seen him see us and gotten chills down my spine. He knocked on the door when neither of us was home because he’s figured out that when the car’s not there, I usually am, and my boyfriend isn’t.

Sorry, vampire, but you’re not invited.

I’m not a violent person. We are all made of stars, even The Troubled Ones. But I’m not an oasis, nor a punching bag. More than ever before in my life, my body feels like a space that needs protection and love. It’s my home.

Last week a girl came into the shop seeking amethyst crystal. She was gentle and open and in the process of discovering her psychic powers (which we all have, we’re just at varying degrees of openness to them). I shared with her that she seemed psychically sensitive already, so it might be more about guarding her personal space and discerning what to let in and what not to. She freaked out and left the shop. The lesson? What I offered wasn’t for her. It was for me.

So I’ve built an energetic wall. I cleansed the house with sage and put a spell on the front door. I didn’t really know what I was doing but it felt appropriate. I alerted the police, though their response was, “sorry, he hasn’t done anything illegal yet”, and told everyone I know about him – including you, dear reader.

No Pasaran, amigo. My body is not your saviour.