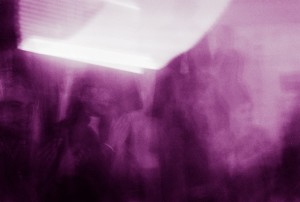 Image Courtesy of WE LE MIR

The veil has been lifted this week in No-Pill Land and I’m seeing the world much more clearly. It’s still my subjective experience of this realm we live in called Earth, but I feel awake, engaged and ready for action in it. Hello, good morning, rise and shine, time to get up because shit can be beautiful and spiritual, but it can also be fucked.

I joined Facebook again after three years absentia. It’s a choice that feels deeply connected to something I lost while under the influence of the pill: a genuine desire to express myself and connect with others. This time around there’s no sense of not being good enough or feeling overwhelmed in the face of social media’s heaving, carefully curated collective presence. The self-denials and fallacies are so blatantly obvious. That wasn’t the case before. Before, I saw Facebook as a cluttered closet with a wonky mirror that made me feel bad about myself every time I got a glimpse of my reflection. But now I see how funny the illusions we spin around ourselves actually are. Why couldn’t I see them before? The pill! I stopped taking the pill! Now I’m totally amazing and free of negativity in all its heinous forms! Well, that would be the Facebook-selfie-denial response. But, to be honest, there really is no other logical explanation for why I couldn’t handle a relationship with social media before and am enjoying it so much now. A fundamental shift has taken place.

Facebook seems like a great way to relish in the lives and creations of those around me. Plus, reading and following more has been great, because getting my Gigi Hadid / Kendall Jenner fix at the newsagents each week had became an obsessive, rather self-conscious task. The day my boyfriend suggested I just buy the tabloid magazines marked the end of the little trips to the newsagents and my return to Facebook.

So I’ve now been fully exposed to the wrath of information that is the News Feed. This confirmed for me that more options are needed to safely plug into the matrix. I don’t regret entering it again, but I need a dimmer. It’s too much. There are publications I want to follow, but the amount of updates they post matches the speed of an M60 30 calibre and it doesn’t feel like a positive contribution to my overarching sense of “wellness”.

And I don’t care what every “Suggested Post” or invite I get to “Like Page” says. Please stop guessing at me about me. Let me decide what I go to and what I want to receive.  Goodbye pill, hello healthier boundaries? Maybe.

In a similar vein, I have un-followed a lot of people that I befriended, not in an act of rejection, but in an act of self-preservation. I want the interactions I have – virtual and physical – to be consciously chosen. There’s no reason to be on the crowded street of social media 24/7. I enjoy choosing to go and look at a friend’s page when I want to go and look at a friend’s page. It feels like it puts my “conscious curiosity” in the driver’s seat of the online experience as distinct from an algorithm.

Mulling over the desire that sparked this helped me to realise that creating work as an actor / writer / director is different from connecting with others as me, Madeleine Ryan. I’m only just beginning to understand this. I’d also love to be able to measure how different the quality of the work I’m creating now is compared to what I was doing during the decade on the pill. That’s one statistic I’d very much like to have, because something tells me the quality of what I’m producing now is a lot better. It may only be Week Seven, but there’s already far less fog to navigate between emotion, story and communication.

It seems I’m not just opening up to more conscious communication with the living and the virtual, either. During a quiet moment at work over the weekend one of the readers looked at my cards and shared with me that the ability to see the dead and communicate with spirits in a more direct fashion was on its way. Fast. Like, not passing Go and it’s not collecting $200. I’m in the process of being “initiated”.

Please note: this certainly isn’t going to be the case for every woman! I can hear the story being retold now: “yeah, this chick went off the pill and started seeing dead people so, you know, fuck that shit”. Every woman’s experience with the pill – off it or on it – is completely different. Neither judgment nor dead people are guaranteed.

A useful guide for every woman, however, is Miranda Gray’s book The Optimised Woman. Gray writes a step-by-step guide for how to utilise the physical, mental, emotional and spiritual gifts that are made available during each phase of our menstrual cycles. She explores how each one – pre-ovulation, ovulation, pre-menstruation and menstruation – has the capacity to open us up to all kinds of untapped resources inside ourselves if we take the time to listen and observe them. Hers was a wonderful perspective to read about, because perceiving each phase as a unique and precious gift – rather than something to negate or avoid – simultaneously felt very ancient and very revolutionary.

Personally, it’s no surprise that going off the pill has made the realm of the subconscious and spiritual more accessible. I’ve always sensed spirits and guardians, but in recent years they’ve only presented themselves as cryptic dreams, colours, shapes and intense feelings. They’ve been more absurdist than blatantly obvious.

Blackheads, on the other hand, have been blatantly obvious this week and according to Louise Hay they represent “small outbursts of anger”. So before another tiny volcano erupts and a great, great grandmother returns to console me, I shall go and steam my face with lavender oil.