kill pill: part thirteen – the girl who does too much 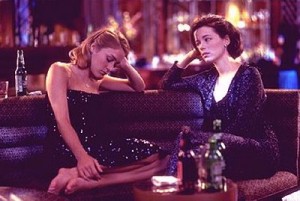 Still from ‘The Last Days of Disco’, directed by Whit Stillman.

The last week has been an anomaly. It’s no wonder that menstruation can also be called a period, because the definition I found online under “physics” said a period was:

The interval of time between successive occurrences of the same state in an oscillatory or cyclic phenomenon, such as a mechanical vibration, an alternating current, a variable star, or an electromagnetic wave.

Menstruating definitely felt like a variable star in my galaxy. It was a time of lower energy, deeper thought, less motivation and greater stillness. In an ideal world, I would have been sitting, looking out a window, sipping a cup of tea, taking a day-long “nap” then writing my dreams down. I was exposed to such trippy dreams during that time: a friend fell pregnant, an employer died, a ghost of my not-yet-dead godmother visited me, I was doing tarot readings out of JB-HIFI and I showed Shia LaBeouf how to float from the ceiling, which prompted his making love to me.

When my boyfriend read last week’s column he told me that I’d better remind readers I have a job, because my extensive introspective tendencies and self-improvement habits seem to be all that I do. Indeed, I am very growth-oriented and constantly in the midst of a process about something. It’s rare for me to reach a point of conclusion or definitive action on anything. For instance, if someone is unkind to me, I go through several steps to deal with it that can take anywhere between fifteen minutes and five years. I’ll start by asking myself what the Universe is trying to tell me through the experience, then I’ll consider how I can heal the impact it has had upon me and finally I might figure out what I need to do or not do about it. To the outside eye it may seem like nothing is happening, but this process plots the course of my entire existence.

Be it known, however, that my usual level of energy includes a plethora of working-girl-activities, too, such as: being at the shop, tutoring students, doing weights, running, cooking, working on my next performance project, cleaning, visiting my family, maybe seeing friends, writing grant applications, researching, reading and producing this column. I usually do a lot, I daresay too much. Even when I’m resting I am studying Why People Don’t Heal and How They Can, steaming my face, sweeping the kitchen, booking my next session with my therapist and researching the benefits of Labradorite.

I once wrote a poem about my interminable state of doing-ness, called Don’t because when I lived in a share house, one of my roommates observed that I was so disciplined it frightened her. She said this at the tail end of a day I’d spent nannying, going to the gym, food shopping, writing a 2,000 word article and pitching it to a string of publications. It got published nowhere, by the way. Meanwhile, I studied her gently cooking, doing her washing and sitting in the sun with a friend and a cup of tea the way I watch lions pace at the zoo and envy their swagger. She had a job, she worked at a café, but when she wasn’t there – she stopped.

Why couldn’t I stop?

I moved to the country in an attempt to opt out of this perpetual state of doingness and I think it’s helped. When friends come to visit from the city, I notice how quickly their minds and their mouths move and I sense how quickly my mouth and my mind wants to start moving in response. Something must have changed in order for me to notice this. Maybe my median-state nowadays is a lot slower than it used to be. I certainly spend more time caring for myself and less time in traffic or going nowhere on a X-trainer for 30 minutes every second day, before food shopping at Coles and hating myself.

When I had my period, however, absolutely everything stopped. The stoppage went beyond my usual countryside pace. I worked at the shop, but that’s about all I could actively, physically “do”. I thought about what I’d been reading, I thought about catching up with people, I thought about the next performance project and I thought about exercising. I didn’t even get to my high school reunion because I could sense socialising during this time was going to result in a series of situations akin to Vincent Gallo being interviewed or Marina Abramovic’s The Artist is Present.

Nothing could be “done”, but the quality of my thinking about things was very refined. I may have been staring at the ceiling, but whatever scraps of genius I may possess were looking back at me. I could sense this state of contemplation potentially being of assistance in the long run, and according to Miranda Gray in The Optimized Woman, it is. She calls it “The Reflective Phase” in a woman’s cycle and believes it to be phenomenal for accessing the subconscious and a nearing-on-constant state of meditation. She writes that daydreaming, trying things out in the imagination and letting go of what doesn’t matter while menstruating is hugely valuable and sets us up for the more active phases in the month ahead: ‘Accept the phase, enjoy the phase… Allow for downtime.’

So the next time my period comes around ‘Stop,  Just Think About It’  lands first place on the to-do list.

The doer does it because that’s all she can do. If she didn’t, nothing would get done. If she didn’t, nobody else would do it. They never do, so why should they start now? They probably wouldn’t do it even if they could, and she knows that so she just does it. Now all she knows is doing it, because they never did it. And why would they consider doing it now? Particularly given she’s the one who’s been doing it all along? They know she’ll do it again, because that’s what she does. It always gets done when she’s the one doing it, no harm done. Especially when it gets done. So she just does it. Even if they did it, she wouldn’t notice, because she normally does it. What else can she do?

2 thoughts on “kill pill: part thirteen – the girl who does too much”