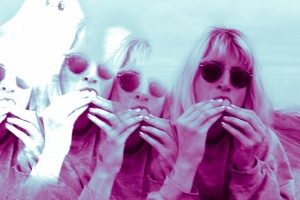 Photograph of Madeleine Ryan Courtesy of WE LE MIR

I have an image of the characters from Reservoir Dogs sitting around a table eating burgers inside my uterus. But instead of having names like Mr White or Mr Pink, they’re Mr Bloating and Mr Blood. And they’re probably ladies, not men.

I’ve spent the last week eating metaphorical burgers around this table: cravings, cramps, bloating and bleeding. I guess I’ve chosen a bumpy road so I can’t really be surprised when I hit a few rocks.

Sorry, did you say rocky road?

Because I think I actually feel like Turkish delight. Mmm… Haven’t eaten that in a long time. Maybe years. Wow, that Indian from three days ago is still making me bloated … wait?

I’m really angry with my boyfriend for nothing I can name in particular and if he asks me to name what it is in particular one more time… I’m going to have to eat more Turkish delight. Or maybe tofu. Again. It contains oestrogen, so I must be… withdrawing? What? I have a headache. I want to orgasm. I want him to orgasm inside me. I want to make love.

A friend of mine went off the pill and was pregnant within weeks.

But I read an article on PopSugar that said some women won’t get their periods for months after stopping the pill. Others never get a period again and are unable to conceive. Sufficiently freaked out by this, I turned to Holly Grigg-Spall and – lo and behold – in her book Sweetening the Pill she says that there’s a lot of confusion around this issue. Apparently, it can take up to a year to return to your natural cycle after coming off hormonal contraceptives. Even two years. And due to the lack of education around this, she argues, many women may be turning to IVF treatment before it’s necessary.

I got a “period” within four days of having stopped the pill. I put “period” in quotation marks because I learned that the “period” women experience on the pill is, in fact, a fake one. It’s withdrawal bleeding from the artificially induced quasi-pregnant state you’re in. Quite simply, if you don’t ovulate, you can’t menstruate. The bleeding is a decoy. A substitute. A diversion tactic. Chk-chk-boom, it’s Tom Cruise under that guy’s face. Yep. That’s why “skipping” is considered safe by scientists and pharmaceutical companies because, well, you’re not having a natural menstruation cycle in the first place, so why stop there?

This hamburger is a magic pudding.

With a desire to ensure my system is as balanced as possible during this process, I decided to see an osteopath. (I actually thought he was an acupuncturist and found I was very mistaken.) He believed me to be ‘in very good nick’ but just from looking at my spine he identified my digestive problems. ‘Yeah, I’ve had Irritable Bowel Syndrome for a decade…’ I found myself saying. And it was in that moment that I realised I’ve had IBS for the same length of time I’ve been taking the pill.

Now, my digestive system has always been a sensitive area. I was a Caesarean baby and on athlete and Plant Based Diet advocate Rich Roll’s podcast he discusses with Dr Robyn Chutkan about how babies born via Caesarean are more likely to develop IBS later in life, as they miss out on some essential minerals that are present during a vaginal birth. I also went on to have Colic. During childhood I remember sitting opposite a male doctor donning a suit and lost inside his large leather chair diagnosing my recurring nausea as ‘stomach migraines’. When I was 17, I developed an eating disorder which – to throw around some labels I don’t entirely feel comfortable with but help when describing things in 1,000 words – started out as exercise bulimia and migrated to binge eating.

I’ve been attributing my IBS to these events. Largely because I got very few answers back in 2007, I had a colonoscopy and a gastroscopy to explain excruciating belly pain I was experiencing. When the results came in the doctor handed me a one kilogram packet of bright orange Metamucil and directed me to his receptionist. Since then, I’ve tailored my life around catering for this phantom-condition, which in recent months has led to consuming no gluten and no animal products. Which has helped. I think.

It’s possible that ceasing the consumption of synthetic hormones on a daily basis may help, too. Searching online, I discovered that many women have linked their eating habits, cravings, IBS, depression, anxiety, weight loss and gain and eating disorders to hormonal contraceptive pills. Endocrinologist and Director of The Centre for Menstrual Cycle Research Dr Jerilynn Prior wrote an article titled Hooked on Oestrogen which concluded that the hormone oestrogen is what drives addictive behaviour. She argues that even drospirenone-containing pills impact this because although they’re a weak progestin when compared to previous generations of pills, they have the power to create an oestrogen-dominated state in those consuming them.

Very slowly something started taking an unsettling shape in my mind. It happened over dinner with my partner. Slowly, with each bite of tofu. Being a baby with colic or a nervous child is one thing. But what if the most traumatic experience of my life was the result of taking hormonal contraceptive pills?

My eating disorder emerged during year 12, which was a stupidly stressful year. Granted, I’d already lost a bit of weight before a hormonal contraceptive touched my lips. But once I started taking them in February 2006, I had lost 10 kilograms by April. Come June / July, 20kgs were gone from my frame and there wasn’t a spot of ‘fake blood’ to spare. Nor were there tears. I couldn’t cry. I couldn’t feel. I could barely eat. ‘Such a stressful year. Such a stressful year….’ My BMI was freakishly low. My doctor changed the pill I was on in September and by November I was binge eating. My skin flared up in all kinds of ways during 2007, I took a leave of absence from uni, I hated myself and my pill was changed again. And again and again and again until I somehow ended up on Chelsea. But I recall others along the way ~

A little bit of Yasmin in my life

A little bit of Yaz by my side

A little bit of Juliet is all I need

A little bit of Estelle is what I see

A little bit of Brenda in the sun

A little bit of Diane all night long

A little bit of Chelsea here I am

A little bit of you makes me your …

I cried rivers into my spiralised zucchini.

Australians seeking help with eating disorders can call the ED Hope Support Line on 1800 33 4673 or access information via the Butterfly Foundation.