let’s talk about the rohingya 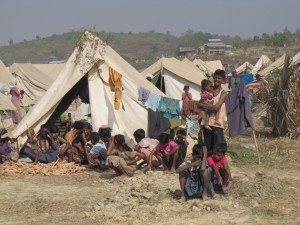 Rohingya. When you hear this word, does it spark any thought in your mind? Does it spark any segment on the news you’ve seen recently? Anything you learned in class? Does it sound familiar… at all? When I asked some of my friends if they’ve heard the word “Rohingya”, the answer was “no”. And this is troubling, considering that what the Rohingya people are going through is one of the worst atrocities of today’s time.

The Rohingya are a group of Muslim people that are persecuted in the country of Myanmar. They are without home and without state, and are deprived of human liberties by terrorists and leaders who won’t help their case.  According to the Council on Foreign Relations or CFR, government policy limits the rights of the Rohingya people including religious freedom, marriage, and education. Such policies have contributed to heavy discrimination against the Rohingya people, especially by a group of self-proclaimed Buddhist extremists.

One Rohingya refugee woman named Rani Begum says: ‘My husband was chopped in Myanmar in front of my eyes. They also cut my daughter’s stomach. She cannot walk straight now and she lost her voice after the incident.’ Another Rohingya refugee man, Sultan Mohammed, stated: ‘We left our country for freedom. We were not allowed to practice our religion, to pray at the mosque, or even educate our children. I’m glad that I can practice my religion [in my new home] without the fear of being killed.’

The limitation of human rights, as well as horrid violence against the Rohingya, has resulted in many refugees fleeing Myanmar. For CFR, Eleanor Albert writes, ‘since 2012, the region’s displaced population has been forced to take shelter in squalid refugee camps’. ‘More than 120,000 Muslims, predominantly Rohingya, are still housed in more than forty internment camps, according to regional rights organisation Fortify Rights,’ Albert continues.

Now let’s take a moment to think about this. There is a group of Muslim people, that are being oppressed to an extreme degree with horrific violence and the absence of basic human rights. Why isn’t the media talking more about this? Why aren’t we learning about this in school?

The media, garnered to appease a white, male, non-Muslim audience, immediately jumps on stories when the perpetrator is a self-proclaimed Muslim, as opposed to perpetrators who aren’t. Conflicting with the media’s interest, a lot of the perpetrators in this example claim themselves to be Buddhist. One can only imagine the media’s take on this had the situation been reversed and if the oppressors had claimed themselves to be Muslim. It would have been all over the news, millions of people would have been outraged, and there would have been calls to take down the terrorists. Not to mention, the Rohingya are Muslim, brown-skinned, and not from the West, so their situation is not as talked about.

The media’s silence on the subject as compared to attacks in the West is worrisome. It’s as if Muslims are somehow less than human. An attack on a Muslim is not a big deal; an attack caused by a self-proclaimed Muslim is. Muslims are only worthy of being talked about when the blame of suffering can be pinned on them instead of the other way around.

Muslims are also apparently worthy of being talked about when it comes to “protecting borders”. The government of Australia has offshore detention centres for refugees, some of them coming from Myanmar. At these detention centres, refugees suffer emotionally, physically, and mentally, as detailed by The Guardian. They are abused by the guards and many have been driven to self-harm and suicide due to horrific conditions. Attention is focused on “protecting borders”, when no real threat is even present, and taken away from the appalling situations of the refugees, both back in the places they’re fleeing and in these detention centers. In such a case, racism and irrational fear takes precedence over humanity.

In addition to the bias of the media and the abuses of government, we must also take into consideration of what schools are teaching. We learn about wars, slavery, and the Holocaust. Why do we learn about it? So we remember not to repeat it. The problem is, it is being repeated.

The Rohingya Muslims of Myanmar are a living, breathing example of history repeating itself. An example of this is identification. Going back to the CFR article, Albert also writes,  ‘the Rohingya have been able to register as temporary residents with identification cards known as “white cards”, which Myanmar’s government began issuing to many Muslims (both Rohingya and non-Rohingya) in the 1990s’. There it is. A parallel to the yellow stars Jews had to wear around the beginning of the Holocaust for identification purposes. The CFR also mentions that along with limited rights, the cards gave voting rights to card-holders in 2008 and 2010. Due to Buddhist extremists being against that, the cards were cancelled in 2015. This should be enough to pay heed to the situation. This should be enough to realize that what’s happening to the Rohingya is injustice, that is oppression, and that it is wrong.

After all, what is happening to the Rohingya people, is genocide. The intentional wiping out of a group of people. And it should worry all of us, because regardless of what race, religion, or gender you are, these are our brothers and sisters that are dying out and are suffering.

Even if we can just take the time out of our day to think about it for one minute, or to educate one other person about what’s happening, it’s still something. And we should strive to do that something, whether it’s big or small, especially if the media, certain government policies, and the education system won’t do it for us at the moment.