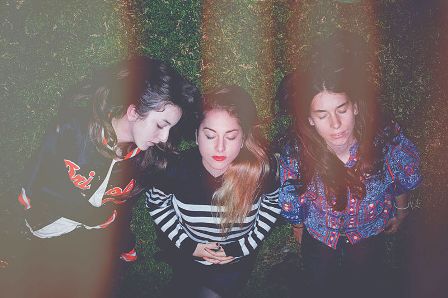 When asked to name a girl group, one of the first names to come to mind is the Spice Girls, or maybe The Supremes, but when asked to name one of more recent times, I have to stop and think. If you do as well, hopefully this list will help you out.

1. Haim
Okay, I was certain that it was just the three sisters from California and then I looked them up and discovered the drummer, but we’re just going to forget about him for a moment. Check them out.

3. Stonefield
These four sisters from Victoria won Triple J’s Unearthed High as Iotah in 2010 and took the small step from there to playing at Glastonbury the next year.

4. Tegan and Sara
Need I really explain how great these two are?

5. The Veronicas
I actually thought these guys were done and dusted, but I see them reblogged on Tumblr a hell of a lot, and it turns out, they have a new album in the works.

6. Stooshe
These guys are interesting. There’s a ’60s vibe happening with a bit of…something else thrown. I can’t quite put my finger on what that something is, but it’s worth a listen.

7. The McClymonts
I’m not really into them, but I’ve thrown them in for the sake of variety. The three sisters from Grafton, NSW have done pretty well on the Australian ARIA charts, including hitting number 2 and Gold status with their second album.

8. The Staves
Sisters again. Indie and beautiful and whimsical and listen. Now.

9. Little Mix
You know that song ‘Change Your Life’ that played a least a thousand times during an ad for a reality show? I don’t remember the show (I’d take a stab at House Rules but I could be wrong) but I do remember the song. That’s these ladies. I’m not normally one to advocate for reality show throw together groups, but I figure not knowing their origins before I considered them for the list must speak for something.

10. The Andrews Sisters
The original and the best.