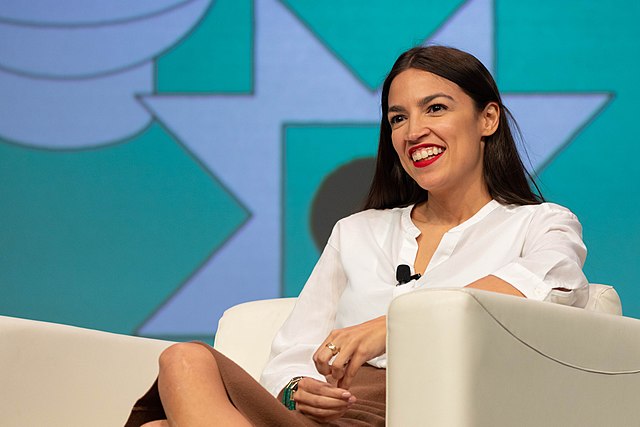 There’s a rookie female politician who is gaining the ire of her colleagues and the way she’s coping with her newfound platform is particularly interesting. Her name is Alexandria Ocasio Cortez, or AOC as the US media often refers to her, and she is refusing to be another notch on the sexist media’s belt. Indeed, she is challenging the Democratic Party establishment and US political commentators head on. Her policies might be (for this conservative woman) idealistic and naive, yet the impact she is making in Washington is quite something. Regardless of what you think of her policies, the way she is being attacked by the media is troubling and women from all political stripes should come to her defence.

You might have heard her name already – it’s ever- present on Twitter and Facebook. Rarely has a new member of Congress seen such a start to their political career: she’s been the subject of a recent feature on the US version of 60 Minutes and she is lambasted repeatedly on Fox News and conservative media in general. Yet her social media presence is impressive (she has over 2 million followers) and her speeches draw large crowds; she ignites debate and political debauchery, the youth drinking up every word she has to say with enthusiasm and vigour because she is promising so much. So, who is she? And what does she stand for?

AOC came to power in an unexpected upset, beating the long-standing Democratic representative of New York?s 14th Congressional District, Joe Crowley, in a surprising primary victory. Her campaign appealed to her district, which encompasses a large working-class population in the Bronx and Queens, because she herself is from humble roots. She worked as a waitress to help support her family after her father passed away and she was able to articulate the struggles of the working class effectively based on her own background. She made it clear that she understands what it’s like to worry about putting food on the table and paying the bills; her campaign ad did a wonderful job at highlighting this to voters and has been used as an example of effective campaigning. She is for universal healthcare, education and abolishing the Immigration and Customs Enforcement Agency (also known as ICE.) She is also for taxing the rich at 70% and believes that ‘no American should be too poor to live.’ It’s because of these beliefs that she labels herself a Democratic Socialist.

The US media is struggling to come to terms with AOC because she is proudly a Socialist, and is using her voice as forcefully as possible. Yet her whole life is being scrutinised, not just her policies. From her clothes to her days as a college student, AOC’s life is being discussed. How can a humble socialist wear a nice suit and heels? Why is she seen dancing in a video? She looks like a silly little girl that couldn’t possibly understand public policy. Is she qualified for such a position? Is she really working class? There’s even been a fake nude photo scandal connected to her, which is a new low in American political discourse. New York Times columnist Paul Krugman noted the bias against her on Twitter recently, tweeting: ‘First off, the constant attempts to dismiss her as stupid are helping to highlight the casual racism and sexism of so much discourse…’

Despite all this vitriol she is refusing to back down and is determined to enact change.

But the treatment she’s receiving calls all of us women to stand up for her, wherever we are on the political spectrum.

We all know that women are unfairly scrutinised once they enter public life – it seems to come with the territory. Yes, we’ve come a long way and our voices are being heard, but women are still watched under a particularly sexist gaze: their clothes, their hair, their speech, their relationships… Take the treatment of Greens’ Senator Sarah Hanson Young by her male colleagues or the treatment of Julia Gillard received whilst PM. Look at the way Sarah Huckabee Sanders has been ridiculed for her looks. All disgraceful, to say the least. AOC’s treatment by the media reminds us that women need to stand up for each other more ACROSS party lines. It was refreshing to see the daughter of John McCain, and political commentator in her own right, Meghan McCain, recently coming to her defence, asking her fellow Republicans to ‘stick to policy’.

We need more women like McCain to stand up and call out this kind of behaviour. As a conservative woman myself, I take issue with the way she is being harassed and mocked. We are better than this and it’s time to stand up against such hatred and ridiculous commentary, which serves no purpose other than to intimidate women and ward of potentially great public servants.

Disagree with AOC all you like (I surely do) but her pluck and determination are worthy of admiration and she deserves respect, plain and simple. This goes for all women across the board.