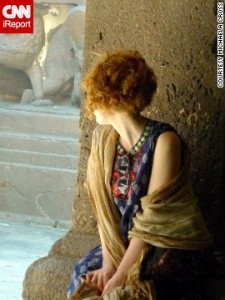 ‘India: The Story You Never Wanted to Hear’ was posted by Michaela Cross (using the username RoseChasm) on CNN iReport, and describes the sexual harassment she experienced when studying abroad in India. Since it was first posted on the website (on the 18th of this month) it has received over a million page views and almost 100,000 shares.

Michaela’s story is a heart-breaking one, and one that is important for people to read. However, I do think that the story does have the potential to do more harm than good in terms of stereotyping, and I think that it is something to be aware of when reading her story.

Michaela, though I don’t believe it was intentional, made a lot of blanket statements about India. She seemed to suggest that she was harassed due to the fact that she is white. However, Indian women also experience high levels of sexual harassment and assault – as was apparent in the comments in response to Michaela’s article from Indian women who shared their own stories about the groping, stalking and assault that they too have experienced.

I also think that it is also very important to be aware that many Indian men, like those everywhere, are kind, compassionate and respectful towards women. The downside of Michaela’s story was that it focused ‘men’ as a whole, rather than on the individual people that committed the unforgivable acts that led to her PTSD. Creating an ‘us’ and ‘them’ mentality is not only counterproductive, but it is also unfair to the men of India.

Despite all of the negative press regarding India at the moment, it is important to remember that India isn’t just getting a lot of media attention because of high profile rape cases. It is also getting media attention because people in India, both men and women, are fighting for change. Laws are changing due to public pressure, and educational campaigns are being launched that aim to fight to current the social structure and inequalities that lead to high incidences of sexual harassment and assault.

We must always be aware that rape culture is not limited to one country, nor is it fair or just to judge a group of people on the actions of a few. However I am not in any way blaming or criticising Michaelea for sharing her story- it was incredibly brave of her to come forward and to give a true and honest account of what travelling can be like for young women. It raised awareness about what many women are experiencing, not only in India, but all over the world, and promoted a lot of healthy discussion that may very well pave the way forward.

One thought on “reporting sexual harassment in india: raising awareness or creating stereotypes?”