seth macfarlane and the oscars: why are we defending him? 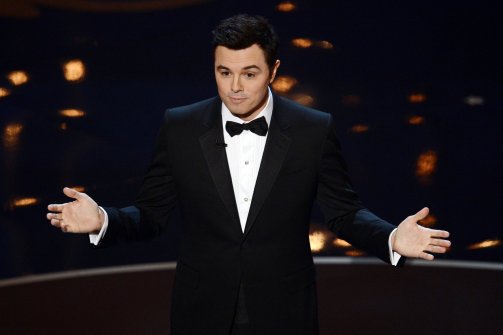 We all knew Seth MacFarlane was going to say something offensive right from the moment he stepped on stage at The Oscars. After all, Family Guy is a very offensive show—it plays off our idea of what is considered good and bad taste to great effect. Indeed, most humour is offensive. I myself initially laughed at The Boob Song. But The Oscars is not Family Guy. And if Seth MacFarlane is such a talented comedian, why do so many people feel the need to defend a joke that was reductive towards women?

The very fact that we’re defending him is saying a lot. On her blog Hersute, feminist and writer Jessica Alice cut through to the very heart of the issue when she said:

‘The Boob Song was the song and dance equivalent of trolling. MacFarlane knew people would be pissed off, but that they could easily be dismissed as prudish, boring or humourless because, as any feminist knows, it’s considered prudish, boring and humourless to care about sexism and misogyny.

‘As long as people continue to shrug off such sexism as harmless fun, sexist attitudes are perpetuated. Women actors who fight daily to be taken seriously, to perform complex characters that are not defined by their relationship to a man, to be able to be in a film without having to do a nude scene, these women will have to fight that bit harder every day that comedians reduce their entire careers to having seen a part of their body.’

By brushing off such behaviour with the words ‘Well, what did you expect?’ we are not only giving these people a get-out-of-jail-free card, we are ignoring the very issue at heart.

Maybe it is okay to sing a sexist song. Maybe it is okay in some contexts to laugh at women who are brave enough to get naked on screen, to present characters that are complex and multifaceted. But it definitely isn’t okay to stifle such a discussion with a dismissive wave of a hand.

‘I Saw Your Penis’ song and dance routine, anyone?

What are your thoughts, Lipsters? For another perspective, check out Holly’s piece.

2 thoughts on “seth macfarlane and the oscars: why are we defending him?”