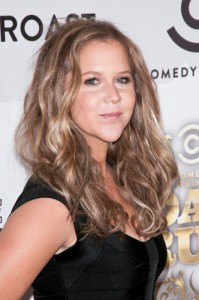 Amy Schumer has responded to an open letter outlining the link between shootings and gendered violence, asking to Schumer to ‘be a voice for your generation and for women’. The letter follows the shooting at a screening of Schumer’s film Trainwreck in a Louisiana cinema that left two women dead. Schumer responded in a tweet: ‘Don’t worry I’m on it. You’ll see.’

The author of the letter, Sarah Clements, is the daughter of a Sandy Hook shooting survivor. The letter highlights the disproportionate number of female victims from gun violence and the particular harassment women who support gun reform experience. ‘The hatred and trolling of women fighting for gun reform is specifically twisted to become gendered threats and attacks,’ the letter reads. ‘They reference rape, “setting us in our place,” obeying men and shutting us up, and overall they simply exemplify the worst of a patriarchy obsessed with the symbol and purpose of guns.’

Last week, Schumer made a statement with her cousin and Democrat Senator, Chuck Schumer, calling for universal background checks for people seeking to buy guns in America. Schumer did not address the role of misogyny in gun violence.

The Trainwreck shooting has drawn some attention to the role misogyny plays in gun violence. The Louisiana shooter, John Russel Houser, had a domestic violence complaint made against him, and a history of opposing women’s rights. Schumer’s very public championing of feminism has been suggested as a reason for the choice of film for the shooting. In her letter, Clements writes: ‘A showing of your film?—?an honest, unapologetic celebration of women’s rights to our bodies, decisions, and independence?—?was the place a middle-aged man who, “opposed to women having a say in anything,” chose to commit a mass shooting.

This highlights the frequent positioning of Schumer as a leading voice on feminism and gender politics in popular culture. Her stand-up comedy, television show and film have all dealt with modern gender roles and the sexism inherent to them. Her work has consistently skewered rape culture, workplace sexism, the objectification of women, internalised misogyny, and socialised self-loathing in the name of appropriate feminine behaviour.

Schumer’s handling of these issues is often deft and very funny. However, some of her work actively partakes in harmful and intolerant depictions of sex workers, transgender people, and, most frequently, people of colour. These jokes usually target white, straight cis-men but by using underrepresented or marginalised groups as props or punch-lines they perpetuate the same oppressive behaviour that Schumer is attempting to lampoon in the first place.

This makes her a very problematic face for modern feminism. Schumer’s response to accusations of racism was circular and simplistic. ‘I enjoy playing the girl who time to time says the dumbest thing possible and playing with race is a thing we are not supposed to, which is what makes it so much fun for comics,’ Schumer said. ‘You can call it a “blind spot for racism” or “lazy” but you are wrong. It is a joke and it is funny. I know that because people laugh at it.’

The first problem with this defence is her reliance on the distinction between herself and her character. Her fictional persona of a crude, incompetent boozehound is so frequently invocated in her interviews, awards show speeches and television appearances, that the delineation between fictional, offensive Amy and real, enlightened Amy becomes very murky.

The second problem is the suggestion that a joke’s appropriateness or inclusiveness can be measured by some people laughing. Racists will laugh at a racist joke because it affirms their beliefs, not because the joke reveals a profound truth or universal experience.  Schumer’s defence appeals to the same anti-PC rhetoric that is used to defend intolerant and discriminatory behaviour.

Schumer’s positioning on a feminist pedestal is in line with the recent trend of holding up comedians as public intellectuals. Jon Stewart, John Oliver, Key and Peele, Larry Willmore and to a lesser extent, Sarah Silverman and Louis C.K., are all in the business of moralising through comedy. More importantly, their pithy conclusions are analysed, promoted and rebutted, not simply as comedy but as intellectual guides on vast and complicated issues.

Schumer’s role as pop culture’s resident feminist is problematic because although she routinely investigates feminism and the sexist behaviour and structures that feminism is so concerned with, she does not represent a feminism that includes all women. This speaks in part to the lack of female comics who gain the kind of traction she has. However, it is also borne from a conception of feminism that is preoccupied with the problems faced by white cis-women. While all women face some of these problems, until Amy Schumer is representing a more intersectional feminism, she should not be its loudest voice.