side by side: a guide to the matildas 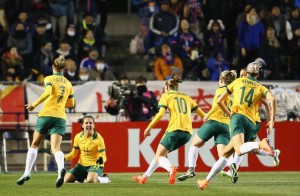 The Rio Olympics are coming up in August, and I was shocked to discover that I know very little about our national women’s soccer* team. When I think of the Matildas, my mind conjures up a mix of highs and lows – the team’s great successes but also their lengthy pay disputes and volatile playing conditions. So here’s your basic rundown if, like me, you’ve neglected your knowledge in this area. It’s time to get hyped.

As is all too common when it comes to women’s sport, despite their hard work and success, the Matildas are severely underpaid and underreported. There was a glimmer of hope last year, with the Matildas advancing to the quarterfinals of the FIFA Women’s World Cup held in Canada and providing daily news stories about the team’s success. But it’s nowhere near the sort of attention that the Socceroos garner for even advancing past the group stage, as they did in 2006 to near wall-to-wall media coverage and adoration.

The Matildas are hoping to snag a medal at the Olympics, although the US is the favourite to take out the gold. They finished on top of the ladder for Asia in the qualifiers, above powerhouses like China and the Korean Republic, which bodes well for their chances in Rio. The team has been on the rise for years, having won the AFC Asian Cup in 2010 – a fact that commentators and fans of women’s sport alike were eager to remind the public of when the Socceroos did it last year. Yep, our women did it first.

When playing in Australia, the Matildas tend to be given games in Sydney, so there was great excitement with the announcement of a friendly against the New Zealand Ferns in Melbourne as a farewell match. Imagine the disappointment, then, when the game turned out to be a curtain-raiser for the Socceroos game – at 5pm on a Tuesday night. Oh, and you have to pay the premium cost that comes with seeing the Socceroos play Greece, whether you want to actually see them or not.

Most of the people I know who are eager to watch the Matildas work fulltime jobs, and would find it nigh impossible to make it to Etihad Stadium at 5pm during the week. Ditto for families out in the suburbs whose children finish school at 3:30pm. While it’s great to have the Matildas playing in Melbourne, the concept of curtain-raisers can sometimes feel a little tacked on. Writing for Outside 90, James McGrath called using women’s matches as curtain-raisers ‘lazy’ in terms of promotion, as well as fuelling the perception that women’s sport cannot garner an audience by itself. You never know if you don’t try.

Within days of announcing this match, Football Federation Australia announced another friendly to be held days earlier in Ballarat. While some fans have expressed an interest in travelling to Ballarat to watch their team play a standalone match, others expressed annoyance that they had already purchased tickets, which started from $35, to the double header. In any case, Victorian fans now have two opportunities to watch the Matildas before they head to the Olympics, and show their support for women’s soccer.

Now, onto their pay disputes. While it has calmed down for the moment, 2015 was a huge year. In September, as a result of stalled pay negotiations with Football Federation Australia, the Matildas boycotted a two-match tour of the US. At the time, most Matildas were earning $21,000 a year on their FFA contracts, well below Australia’s minimum wage of $34,158 and requiring most players to find other supplementary income. Those chosen for the World Cup last year then had to quit their other jobs for the full-time commitment of training camps.

Commentator and journalist Lucy Zelic recounted a heartbreaking encounter with Matildas midfielder Katrina Gorry last year at the height of the issue, when the player broke down in tears describing the state of women’s soccer. ‘I just wish they could spend a year in our shoes – the commitments that we have and the sacrifices that we have to make,’ Gorry said. ‘I am considering retiring in the next few years purely because I can’t afford it.’ Gorry was awarded the AFC Women’s Player of the Year in 2014, and yet still felt the reverberations of the oppressive structures that are holding women footballers back.

Thankfully, a Collective Bargaining Agreement was resolved in early November, with top tier Matildas now earning a $41,000 base salary and the second tier earning a minimum of $30,000 per annum. As well as this, there will be a 10% per annum increase in salaries, as well as increasing match payments and allowances. They were also able to go on a tour of China as a replacement of their dropped tour of the US, in order to gain match fitness for the Olympic qualifiers in February.

SBS Zela have also just released a fantastic expose on the conditions of Australia’s semi-professional women’s league, the W-League. It gives you an idea of what women who want to play soccer in Australia are up against – meagre pay, logistical and OH&S nightmares with training facilities and home grounds, and disrespect from the organisation. It’s a disgrace, but I dare say that it enhances my appreciation of the Matildas, and all women in this country who choose to play the game they love.

Finally, the important stuff – the game. Like any team, the Matildas are made up of players younger and older, playing in various leagues. Some play in the W-League here in Australia, like Matildas co-captain and Melbourne City star forward Lisa De Vanna, while others play in the US National Women’s Soccer League, such as Washington Spirit goalkeeper Lydia Williams. While it shouldn’t be a characteristic that is emphasised above all else, it should be noted that some players have also juggled the commitments of being a mother with professional sport, including recently retired goalkeeper Melissa Barbieri.

This is only a basic look into the Matildas, but hopefully you’ll be inspired to cheer them on in Rio and beyond!

*I use the term soccer, as a way of differentiating from Aussie Rules football