side by side: on representation in coaching 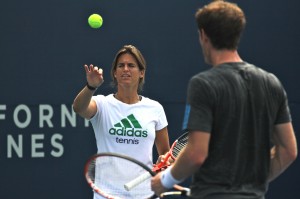 Why is it such a familiar sight to see coaching and administration in women’s sport still made up predominantly of men? What does this mean for the women trying to break into this industry?

I got thinking about this after discussions on Twitter about Carlton choosing Damien Keeping as their coach for the inaugural women’s AFL season next year. Having worked as an assistant coach for the VWFL Women’s Academy and as coach for the Western Bulldogs in the women’s exhibition match earlier this year, Keeping is more than qualified for the position.

However, I think many were disappointed that a woman was not chosen. It’s not to suggest that men can’t coach women’s teams, or that there needs to be some form of segregation. I think it was more of a frustration that there are also many women more than capable of undertaking the role, women who were overlooked.

Sadly, the statistics don’t lie when it comes to what women coaches are up against. In the US, Title IX, part of the educational amendments passed in 1972, opened up college athletics to women in an unprecedented way. Although the amendment has resulted in a spike in female athletes being able to compete in their chosen fields, the percentage of women coaching women’s teams in the US since the 1970s has actually decreased significantly from 90% to 43%. Meanwhile, the percentage of women coaching men’s sport has hovered around 2-3%.

Either way, men are on the receiving end of greater opportunities in this industry. There is clearly a double standard, in which men are considered capable to coach both women and men, while very few women could even fathom coaching men and boys. It is seen as an ‘honour’ for women’s teams to be coached by a man. It was big news in 2014 when former World No. 1 tennis player Amélie Mauresmo became Andy Murray’s coach. Is there nearly as much discussion and debate about Novak Djokovic and his coach Boris Becker? I highly doubt it.

So why are there so few women coaching at the top level? The structural barriers blocking women from reaching the upper echelons of coaching must be taken to task. Until she became the AFL’s first female assistant coach at St Kilda, Peta Searle was forced to give up VFL assistant coaching in 2014 and return to high school teaching, due to insufficient wages. It’s unfair to expect women to ‘stick it out’ at lower levels, hoping for a promotion, while men are repeatedly chosen ahead of them.

The importance of women creating supportive networks in the sporting industry also cannot be stressed enough, although this can be made difficult by the small number of them. Women in the industry, like Searle and Meg Hutchins, director of women’s footy at Collingwood, are already breaking the ground for those who will follow, and serving as reminders that women in this field are not tokens.

These networks are increasingly important to push back against what’s often called the ‘old boys’ club’ of sport, in which contacts and mentors are considered more important than prior experience. It also comes down to women being undervalued as athletes. Even having previously played in World Cup finals, coaches interviewed by sport sociologist Leanne Norman for her article Feeling Second Best: Elite Women Coaches’ Experience were overlooked and belittled by male selectors. And, god forbid, a woman wants to coach a team in a sport that she hasn’t played before.

Aside from the obvious reasons, representation of women in coaching is important on a number of levels. Women coaches serve as role models to athletes of all genders, and break down stereotypes. Australian journalist Tracey Holmes concluded back in 2014 that women will remain outsiders in sport until they are seen as a ‘normal’ part of the sphere. It is hard to imagine women being seen as viable choices for coaches, as long as they remain exceptions to the rule – a sad catch 22.

Unsurprisingly though, people and clubs are slowly coming to the realisation that there’s an untapped source of talent being ignored when women are overlooked for coaching positions.

In 2014, the Richmond Football Club embarked on a three-year affirmative action report, backed by the Australian Sports Commission and the AFL. The study is aiming to examine what is blocking women from reaching these senior positions in sport. Richmond CEO Brendan Gale admitted that the initiative was ‘about making our business better’, adding that it made ‘good business sense’.

Does it hurt that organisations are pursuing affirmative action because it suits them? Of course, but these are necessary steps and it can only be hoped that it will lead to more opportunities and visibility for women working in sport.