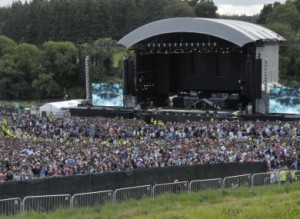 **Editor’s Note : We have chosen not to publish the original photograph referenced in this article, as we will not condone or perpetuate slut shaming. **

An image has gone viral across the Internet out of Slane, Ireland, following an Eminem concert which demonstrates that slut shaming and sexual double standards are still, unfortunately, alive and well in today’s society.

The photo, taken by a bystander in the crowd, depicts a high school girl (apparently aged seventeen) giving oral sex to a boy, who holds his arms triumphantly in the air, while a cluster of men look on. In the subsequent dissemination of this image through social media outlets, it has often been accompanied with the hashtags #Slanegirl and #Slaneslut.

The response to this image has been, if nothing else, proof (as if it were ever beyond doubt) that, when it comes to sexual standards, there are differences at play for males and for females. The underage girl in question has been labelled by social media users as all kinds of derogatory and demeaning names, including being narrowed down to a mere hashtag, as well as ‘dirty’, ‘slut’, ‘rank’ and being the reason behind ‘why mean fear having daughters.’

The boy involved, however? He’s either totally ignored, treated as a bystander himself; is lauded as a hero; or is just ‘being a man’. Welcome to today’s reminder that it’s different for girls, as Sarah Ditum wrote for the New Statesman.

Although this isn’t so very scandalous by today’s standards, the link can easily be drawn. However, living in the digital age only serves to enhance slut shaming on a more viral, worldwide scale – after all, here I am writing about an incident that happened on the other side of the world, in a country I’ve never visited. It just goes to show that although technology has evolved, the attitude towards women’s sexuality and sexual practices have not progressed so rapidly.

I do not mean here to deny the fact that the scene depicted in this image (disseminated as far across the Internet as Reddit and 4chan, through to reputable news domains) isn’t something uncomfortable to view in terms of its content as well as its implications. But the sexual double standards in operation in the reactions are equally as unsettling.

As stated earlier, the young woman involved is believed to be a minor; therefore she has not been publicly identified. The same applies for the young man also involved in the incident, Slaneboy if you will. We can therefore only assume that the sex was consensual, and that the only unfortunate thing that happened was that it was in public, and that there was a smartphone ready and willing to share the moment with the world. Neither party really did anything wrong here, and subsequently nobody was hurt.

The main issue that this really raises is the issue of cyber bullying, intimidation and misogyny on a wider scale. Some of the Tweets with the hashtag #Slanegirl are too foul to even repeat here; yet thankfully, they are beginning to be counteracted with some perspective. I think I’ll leave the last words here with Sarah Ditum, as I believe that she sums up the situation perfectly:

‘…no one got hurt until afterwards, when some people tried to use the pictures to shame, trash and demolish a young woman. The lesson from misogynists is this: “We will come for you.” And not just for being a woman and having sex, but for being a woman and not joining in the condemnation: women who asked why the boy didn’t get the same judgment have called man haters, told they need to raped or threatened with a “kick in the flaps”. A culture that hates women for having sex is one that simply hates women, and that is the grotty truth photographed at Slane.’

2 thoughts on “#slanegirl and slut-shaming”