so tell me, what’s with men’s attitudes towards female comedians? 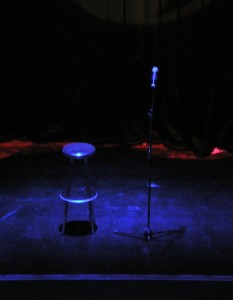 During the recent 2016 Melbourne International Comedy festival, I picked a few acts I’d like to see and sent the list to my mates, in case they wanted to catch the same shows with me. Their reactions towards my choices ranged from dubious to dismissive:

‘So…your list has mostly female acts. Is that intentional?’

‘Count me out. I don’t really find female comedians funny. Except, Tina Fey.’

‘Look, I am not sexist. I’ve seen a range of male and female stand-up comics and I don’t find the female comics funny.’

These responses made me wonder why people are so quick to dismiss female comedians as ‘unfunny’ given that women have been performing comedic routines and doing stand-up comedy shows for decades. Australian comedian Rachel Berger explained this eloquently during the panel discussion, ‘Jeez Louise’, a celebration of women in comedy.

‘For a long time, women who were on stage were there to titillate men,’ Berger said. ‘They danced, they sang, they acted coquettish. Female comedians challenge that. They stand on the stage and say, “hear me because I have something to say”. During my early days of stand-up comedy the men in the audience would slowly lean back in their seat and cross their legs. I had to tell them, “Don’t worry, I am not going to snatch your balls!”’

It is possible that female comedians have the odds stacked against them because of an old mating ritual that has morphed into a social norm; one where funny women are punished. In 2006, psychologists Eric Bressler and Sigal Balshine showed 210 college students images of two equally attractive members of the opposite sex. Underneath each photo, they pasted either funny or not-funny statements supposedly authored by the person. Female participants said they wanted the funny man, rather than the unfunny one, as a boyfriend, even when they thought the funnier man was less trustworthy. The men did not care about the women’s funniness either way. In another study, the psychologists again found that when considering imaginary interactions with people of the opposite sex, women said they wanted men who could make them laugh. Men said it was much more important that a woman enjoy his jokes.

So if men are wired to want an audience for their comedy, comedy will always be a male dominated field that has no reason to accommodate female comics. During the 2015 Melbourne International Comedy Festival, only 19% or 107 of the 559 shows were solo shows presented by women. This in turn means that people watch more male comics and the male point of view becomes the default view. Observations and humour that are contrary to this will be deemed ‘uninteresting’, ‘unsellable’ or ‘a female point of view which can only interest other females’.

Unless of course, you’re the very talented and formidable Tina Fey. In her book, Bossypants, Tina Fey recalls pitching a sketch about sanitary napkins during her time at Saturday Night Live but kept getting push back. ‘I kept bringing it up in meetings only to be told that it would be “too difficult to produce”,’ Fey recalled. ‘I wasn’t sure what that meant until I realised the men didn’t know what a sanitary-napkin belt was. It was the moment I realised that there was no “institutionalized sexism” at this place—sometimes the guys just literally didn’t know what we were talking about.’

Another problem that female comics have is that they are often evaluated as a group and not given the luxury of being perceived as individual performers. This is why when someone watches a female comic that they don’t find funny, they tend to focus on the gender and groan, ‘All female comics are the same’ or ‘Why do all female comics tell the same type of jokes?’

On the contrary, if someone does not find a male comic funny, they would focus on the individual and say, ‘I did not find his brand of humour funny’, or, ‘He’s recycling his jokes from last year’. With this, other male comics are spared from being tarnished with the same unfunny brush.

All is not lost. There is a lot of talk about this being the golden age for women in comedy because Mindy Kaling, Amy Schumer, Melissa McCarthy and the women of SNL headline movies and comedy festivals. They create TV shows with characters like Liz Lemon on 30 Rock and Selena Meyer on Veep who are successful yet insecure and flawed.