spanx: how can shapewear be ‘feminist’? 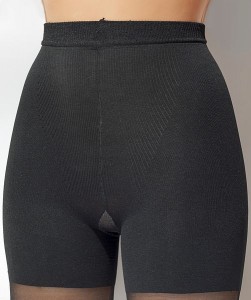 Don’t get me started on Spanx. I hate that the models they use to advertise their shapewear don’t have any reason to be wearing the Spanx in the first place. By reason, I mean that they don’t have any of the bodily attributes that this product is designed to hide.

I’ll quickly clarify that I don’t think there’s any reason to wear Spanx. Tummies, muffin tops and cellulite are all very common and natural features of the female form, and definitely nothing to be ashamed of. I don’t think a person should ever feel obliged to change the way they look, especially if that change involves wearing something that deprives of the ability to sit comfortably. If I had the body of any one of those models, I wouldn’t wear Spanx. Hell I wouldn’t wear clothes; I’d just stand naked in front of a mirror all day in awe of my body. But that’s beside the point.

Don’t get me wrong: there’s been plenty of occasions where I’ve put on a tight dress, looked at my round midsection in the mirror and thought ‘if I only I had Spanx’. I spent the hour before my year 12 formal crying and consequently destroying a $50 face full of makeup because of that very issue. And there lies the root of our problem: By creating a product that “shapes” the body in this way, Sarah Blakely has perpetuated the idea that our natural curves aren’t up to scratch. To put it simply: the fact that this curve-smoothing product is available makes it seem important that our curves be smooth.

I should mention that the boobs and bum are an exception. Take one look at the blonde, Spanx Barbie figure they use as part of their branding. You’ll quickly notice that she is ample in both departments, yet tiny in all the spaces she’s ‘supposed’ to be. Although a smaller body can be achieved by weight loss, the natural cup and butt size all comes down to a genetic lottery. So there is another side to the Spanx issue, as the product’s emphasis on the desirability of curves can make slim girls also feel inadequate. Either way, Spanx is founded on the idea that your body should fit a certain image.

I do love that Blakely is a self-made billionaire, because the billionaire lists continue to be noticeably lacking in women. However J.K. Rowling didn’t get have to make women feel like their bodies were inadequate in order to climb her way up the Bill Gates list. In earning her riches, Blakely has taken advantage of a society where the female body image is really impressionable. I know that Spanx is supposed to be about empowerment and not insecurity; but there’s something troubling having empowerment tied to changing oneself. As if you need to ‘smooth’ (which is a discrete way of saying ‘slim’) your curves in order to feel good about who you are.

As for Spanx trying to call itself feminist; the marketing executives certainly have a sense of humour. One of the best parts of this rebranding is the little love yourself messages that come with each packet of Spanx, like ‘Re-shape the way you get dressed, so you can shape the world!’ It’s the good ol’ back-handed compliment; like when you’re told that you could be really pretty if you just lost some weight. God, that one never gets old.

I know that there are many women who love their Spanx. I’m not going to lie; if I ever become a millionaire, and thus can afford Spanx, I will probably buy a pair. I would love a full body Spanx suit that I could wear for the rest for my life so that my lumpy bits could be forever sucked in and smooth like they’re ‘supposed’ to be.

I appreciate how for many women, Spanx makes them feel more comfortable and confident about their appearance. What I take issue with, is the fact that this end result is achieved by changing, hiding, or ‘smoothing’ the way their bodies naturally look. Feminism encourages women to love who they are, whereas Spanx tells women that with a bit of work, their body can be something to be proud of. Sorry Spanx, but if you’re feminist, then so is Photoshopping.