the f word and sport 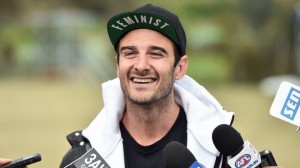 In September, banned Essendon player Jobe Watson made his long-awaited announcement that he would play on in 2017. At his press conference, he wore a cap emblazoned with the word ‘FEMINIST’. Watson spoke of his New York housemate Jackie Funder, girlfriend of former Essendon Bombers player Scott Gumbleton, who had educated him on gender equality and bought him the cap. He promised Funder to wear it at a press conference when he returned to Australia. It was a clear, thought out statement, designed to provide maximum impact.

This action led to plenty of groans and gushing messages alike. It got me thinking about the ‘male feminist’ within the sporting domain. It’s a concept that could be applied to nearly every facet of women’s lives. It seems to be particularly insidious in the AFL fandom, a sport that has traditionally been dominated by men. Sometimes the code’s hyper-masculine culture is right there in your face, and other times it simmers beneath the surface under this acceptable guise.

I was pleased with Watson’s action. And not just because I have the softest of soft spots in my heart for Essendon. Cam Tyeson of Pedestrian summed it up really well when he called Watson’s action ‘the precise and right function of men engaging with feminist ideology: that of the listener, and the supporter’. We need players like him, along with others like Marcus Bontempelli and Brodie Grundy, to speak out on these issues and stand up to sexist behaviour from teammates and others in the industry. That’s the best way for men to show that they’re interested in the cause.

For a plethora of reasons, women can be uncomfortable with men self-identifying as feminists. I groan when I think of some men I’ve met along the way, who’ve espoused the feminist ideals so loudly that it’s become about them, patting themselves on the back for decent behaviour and elevating their voices above the women who are already being spoken over. They seem to go missing when actual effort is required – you know, standing up when their friends make sexist comments, or actively supporting women playing football.  They’re always ready to spout Feminism 101 to applause and heart eyes, though without most of the repercussions that women face when voicing similar opinions.

But it’s fine when they do it, because of their good intentions, right?

I raised this issue with some women in a Facebook group about women in sport to see if they felt similar. The sheer number of stories was dispiriting, especially when they involved male family members or friends.

It hurts when the behaviour that you would expect from ‘other men’ is coming from people that you consider to be your friends. Don’t they respect you enough? Patiently waiting your turn to speak, only to be spoken over. Corroborating what you have to say with a swift Google check, ‘wait, are you sure?’ That shifting discomfort when you seem to know more than them.

A number of women reflected back on bizarre childhoods of segregation where the men sat in the shed to watch the game, while their wives and daughters would watch the same match inside. Or being told to ‘dumb it down’ as dating advice, because men would be turned off by a woman with ample sporting knowledge. Date a girl that loves sport, but not as much as you do of course.

A little thing that I’ve noticed is that men don’t seem to need to preface their opinions with proof that they’re an expert. They don’t say ‘I like this player’ or ‘I think they’re good’. It’s ‘they’re good’, end of story. I recall a conversation with a friend earlier this year when I bemoaned the prospect of the Western Bulldogs winning the premiership without the injured Bob Murphy. His response was to immediately shut me down: ‘They’ll do well. They won’t go all the way.’ Go figure. Somehow, women are only qualified to speak on topics that they’ve written a dissertation on or host a podcast for, and even then they are interrogated.

These micro-aggressions can be difficult to address. I know there have been many times that my friends and I have swept it under the carpet, because we can’t be bothered. You don’t want to look petty, don’t want to deal with the additional emotional labour of being the feminist teacher. Worse yet, you can’t be bothered mopping up the million apologies and self-flagellation that often follow these explanations.

As much as it sucks, women simply can’t shoulder the entire load. Men also need to lead by example, and prove that sexist and misogynist behaviour is unacceptable. Yes, it’s just a cap. It’s not something that we should worship above the actions of women doing their best. But it’s a start.