the lip crew on slut-shaming 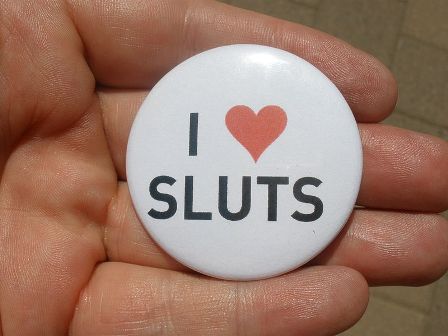 “After Kim Kardashian posted her nude photo in early March, I read several pieces on the double standards in the uproar that it prompted. These articles addressed, in particular, the ease with which we accept women’s bare bodies in our advertising, film, television and music videos when they are affirming the male gaze and the outcry when they challenge it on their own terms.

I think these articles were acknowledging a very important point: the slut-shaming inherent to so much of the outrage. But I also think it is possible to have a queasy response to the image that is not a form of slut-shaming. Discomfort with sexualised women’s bodies should not always be dismissed as slut-shaming. I think the sexualisation of women in advertising, the media and pop culture is a serious issue and shouldn’t be ignored in favour of blanket sex positivity arguments.

Because I think sexual expression gets murky with celebrities. The no-brainer that private women should be able to engage in whatever kind and quantity of sexual activity they like without fear of judgement gets messy when the women, like Kim Kardashian, live very public lives. More than probably any other contemporary pop-culture celebrity, Kardashian is invested in making her private life public. And as a result her nude photographs are not comparable to that of a private woman. Her nude photographs, her sexuality, her clothing choices are not only an expression of sexual freedom but also a performance. Kim Kardashian, the woman demonstrating sexual agency and body positivity, gets blurred with Kim Kardashian the brand, a brand that is undoubtedly invested in affirming the male gaze.” – Arabella Close, Writer

“I don’t understand how belittling and demoralising someone for their sexuality is acceptable under any circumstances. The fact that this is perpetuated towards women reveals such a bigger issue of inequality. It shows the narrow box that women are kept in: too sexual = slut, not sexual enough = frigid. People can act sexually (or not) in any way they want. It’s terribly sad that it’s even an issue in society – it shouldn’t be. It’s constructed to control how women (and men) act and behave. It derives from the idea that women should be pure and submissive while men should be the hunter and protector. What’s even sadder is that a lot of the time those that slut-shame are other women! So many times I’ve seen girls condemn other girls as sluts or whores if their love interest shows them attention. We are pitted against one another, made to feel jealous of each other, to fit into these boxes that have been built for us.

It amazes me that some people don’t consider slut-shaming immoral, and that they feel they have the right to put down people for behaving in ways they don’t deem proper. This lack of awareness is a perfect example of why feminism is (of course) still needed in today’s society. If people are acting in ways they feel comfortable and happy with, why is their sexuality anyone else’s business? The only reason for slut-shaming is to maintain these ridiculous societal expectations that derive from patriarchy and misogyny.” – Eliza Graves-Browne, Writer

“Slut-shaming is something bizarre. It is as intimate as it is cold and aloof. Reproaching anyone – generally those who are not a cis-gendered heterosexual white man – for their actual or perceived sexual behaviour is poor form.  I’ve witnessed a refrain on the internet that sums it up perfectly: You do you. I’ll also tack on ‘and him and her and ze and zir as long as it’s consensual’. Don’t give two fucks about anyone else’s sex life unless it involves your body and immediate personal safety.

It is, however, warranted for us to critique sexual behaviours at the societal level to understand where this phenomenon may stem. Men’s desires have continued to dominate our consciousness; representations of feminine sexuality and those of ‘others’ remain stifled.

Perhaps a key factor in this is something Ariel Levy points out in her not-so-bulletproof Female Chauvinist Pigs: Post-‘Sexual Revolution’, many women’s sexualities have become caricatures of male desires. Women’s sexualities are fetishised irrespective of them being prudish or promiscuous or anything in between – resulting often in embodiment. Many feminists have also noted that when feminine pleasure is a focal point, it’s motivated (in heterosexual relationships, at least) as a goal for men to achieve a gold penis sticker. At least I think it’s a sticker or something that they want.

Levy beckons a question similar to Virginia Woolf’s perspective on authorship and literature in A Room of One’s Own: Do we know what any given woman’s sexuality could be if women continue to base their libidos and practices on phallocentric and masculine-centric notions of sexuality? Where people of the feminine persuasion are not granted the ability to experiment and have this documented in a realistic manner, their sexual narrative is lost. Garnish all of this with everyday misogyny and you have slut-shaming.” – Sarah Iuliano, Features Editor
“I first heard the term ‘slut-shaming’ after the inaugural SlutWalk in Toronto. I understood it to mean making value judgements (usually negative) about someone (usually women) based on their sexual behaviour – everything from the number of partners they’ve had to the clothing they choose. Of course, this comes with the caveat that ‘men’ and ‘women’ are not a monolith – how we experience sexual shame and scrutiny depends on many intersecting identities. I’ve held onto this definition since then, even if the term has entered the same phase that ‘cultural appropriation’ is in now – so ubiquitous as to become confusing and shamelessly co-opted. And I still aim to name it when I see it even if, more often than not, I feel beaten down by the fight.

Slut-shaming is at the centre of most of the criticism Kim Kardashian receives when she does…almost anything. She’s not the only one. But it’s been interesting to see ‘progressives’ engage in it; people who use feminist rhetoric but react so strongly and negatively to a nude selfie, or are seemingly pro-sex but negate the possibility that selfies – undressed or otherwise – could be empowering.  I don’t believe that we have to go out of our way to praise much less feel anything about all expressions of sexuality or self-love. I also think it’s possible not to find nudity empowering. However, there’s something unnerving about the criticism of Kardashian and other polarising women, as if sexuality is fine, but only if you have a certain image, reputation and history.” – Shannon Clarke, Writer