the man behind mad max: is tom hardy for real? 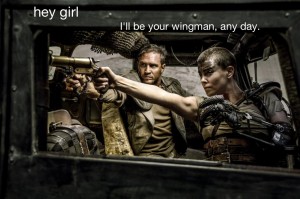 Mad Max: Fury Road is the gift that keeps on giving. The first gift was, of course, an action film that smashed sexist stereotypes. The latest offering in the franchise of post-apocalyptic action films, Mad Max features a diverse and fascinating cast of female characters who are central to the plot, including Charlize Theron’s kick-ass character, Furiosa, who has been widely deemed the best female action lead since Ripley in Alien.

The second gift is the incandescent rage of MRA/meninists. Unable to cope with an action film where women are front-and-centre, let alone one that is focused on showing the devastating effects of patriarchy, they declared it was feminist propaganda. My personal favourite was a rambling rage blog post on Return of the Kings:

‘This is the vehicle by which they are guaranteed to force a lecture on feminism down your throat. This is the Trojan Horse feminists and Hollywood leftists will use to (vainly) insist on the trop women are equal to men in all things, including physique, strength and logic. And this is the subterfuge they will use to blur the lines between masculinity and femininity, further ruining women for men, and men for women.’

You can almost taste his rage. It’s fantastic.

Our cultural obsession with the ‘Trojan Horse’ of feminism, Mad Max, has sparked an enormous amount of creativity: from fan art, to hilarious mash-ups, to the tumblr feministmadmax that is featuring ‘hey girl’ messages from the leading man, Mad Max himself. All gifts, and all fantastic.

But what do we know about the man behind Mad Max? The basics, of course: Tom Hardy is a 37-year-old English actor, who looks a little something like this (and yes, this is vital visual information): 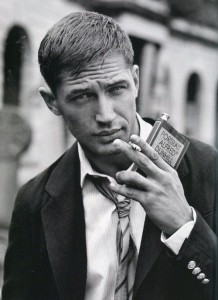 He’s a versatile character actor, albeit one who consistently portrays dark, troubled and violent men.  His most well known roles include Bane in Dark Knight Rises; Bronson in Bronson; Forrest in Lawless; Tommy Conlon in Warrior, but he’s also starred in a multitude of other roles (including a personal, guilty favourite: This Means War, a wonderfully terrible rom com in which he wear tight shirts and is British).

When you move beyond Tom Hardy’s filmography, and start looking at Tom Hardy “The Person”, you find yourself falling down a deep and rather bonkers rabbit hole. Aja Romano, a journalist and popular blogger, tags her posts on Tom Hardy with ‘Tom Hardy is from outer space.’ You do start to ask yourself: is Tom Hardy for real?

In a single conversation with Vulture in 2014, Hardy used the word ‘dog’ or ‘dogs’ 62 times. His first dog was called Mad Max. He once rescued a kitten, and chronicled the experience. This literary masterpiece includes the passage:

‘so I’m like hey little fella, and I look about but no one is looking for this thing. So I stopped and turned round and said hey kat? where’s your family, and he’s like I don’t know [sic].’

The kitten—which he informed people ‘is not my kitten, this is God’s child’—was suitably adorable.

Tom Hardy’s old MySpace account, which recently resurfaced again, is truly one of the marvels of the modern age. There are entire articles dedicated to analysing this phenomenon, but just know it includes the below photo: 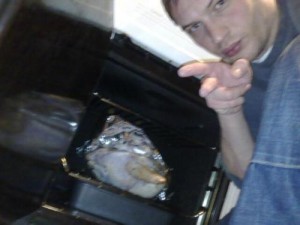 The above image’s original caption was ‘x i’m cooking a turkey yo xx’.

Perhaps this MySpace account is so enduring because his other forays into the realm of social media are always short lived. Never forget his brief stint on twitter, during which time he defiantly tweeted ‘I don’t need to verify sh*t. I’m me’. Preach it, Tom.

At some point down the rabbit hole, you stumble across Tom Hardy’s views on feminism. By now you’ve probably seen his response to a sexist question at a press conference. A journalist asks: ‘As you were reading the script did you ever think, “Why are all these women in here? I thought this was supposed to be a man’s movie?”’ Tom Hardy’s vaguely incredulous stare, and flat response of ‘No, not for one minute, I mean, it’s kind of obvious’ won hearts all around the world. I’m not sure what the journalist was expecting. Tom Hardy made it clear he thinks it’s, and I quote, ‘about fucking time’ an action film that empowered women was made.

Tom Hardy spends most of his time “on stage” playing hyper-masculine characters, and then spends the press tours deconstructing the notion of masculinity and how toxic it can be. ‘I’m not a fighter,’ he insists. ‘I’m a petite little bourgeois boy from London. People didn’t sit up and take any notice of me until I started putting on weight, kicking people and being aggressive.’

He once declared he was as ‘masculine as an eggplant’. This might be difficult to believe, considering that playing violent, dangerous hyper-masculine men has become Hardy’s bread and butter.

But Hardy has brought up again, and again, and again how discomfiting he finds masculinity. ‘I don’t feel very manly,’ he wrote. ‘I don’t feel rugged and strong and capable in my real life, not how I imagine a man ought to be. So I seek it, to mimic it and maybe understand it, or maybe to draw it into my own reality.’ He’s spoken about the ‘myth’ of masculinity, and points out that the actions of the characters he plays would in the real world be ‘locked up, killed, or just bring about nothing but badness’.

Now, let’s all indulge our cynic for a moment. Would it be good PR for the male protagonist of a ‘surprise feminist film’ to say there were too many female characters? Probably not. Here’s the good news: Tom Hardy hasn’t just talked about women, and the importance of valuable roles for women in television and film, while doing the promo for Mad Max. He’s expressed this view time and time again.

‘I think that writing for women and films for women, there could be much better material out there and could be advanced… It’d be interesting to take crime-genre and replace men’s parts and have women play them,’ Hardy said while doing the press for his film The Drop. ‘And not even question it. Just go.’ When interviewing his fellow-actor Matthias Schoenaerts, Hardy stated:

‘I identify with having strong, powerful female influences in my life. Do you think that women are fairly represented in screenplays, film, TV, and theatre today? Or do you think there should be better parts for women than just girlfriend and wife or lover? Because I’m bored with that.’

Feminism is a topic du jour at the moment, and male feminists are a particular favourite. Kate Iselin’s article in Spook articulated a lot of the issues I have with male feminists. ‘Feminism practiced by men is often common decency followed by a request for applause,’ Iselin wrote. How can men really help? Iselin suggests men shut up: ‘Literally. Stop talking and listen.” This is a sentiment Hardy himself has echoed: ‘A great man is largely forgotten by the public. He doesn’t stand on top of a mountain waving a flag, saying “Look at me—I’m a great man”.’

‘I’m not a role model,’ Tom Hardy once said. ‘Don’t look too deep, because after you scratch the surface you are going to find out that I’m normal’. If we could all move our “normal” a bit closer to Tom Hardy, I think the world would be a weirder, and better place.