the (non)sense of anti-feminists : pussy riot 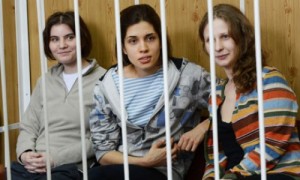 Pussy Riot, a punk band from Russia, was charged in February with hooliganism. Their perceived hooligan behaviour was to perform a punk prayer against Vladimir Putin, the President of Russia, at Moscow’s main cathedral. In most of the media coverage, Pussy Riot is labeled as not just a band but a “feminist punk band” and it seems their strong feminist identity and beliefs are just as problematic as what they are accused of doing.

Only a few days ago it was suggested the three band members were a danger to society and should be isolated. Pussy Riot would be considered a danger to society, as any social activists are who dare question the status quo and aim to challenge long established institutions like governments or religion. The irony with this situation is that it is not so much what Pussy Riot supposedly said but the fact that people believe it was insulting to all of the Russian Orthodoxy, and particularly insulting to the leader of the church in Russia, the Patriarch Kirill.

Another prominent leader in the Russian Orthodox church, Vsevolod Chaplin, stipulated the trial had been ‘willed by God’. Because of the religious fervour over the actions of Pussy Riot, and the prominence of the church in Russia, the separation of church and state barely exists. This is particularly alarming considering the sentence that may be imposed for causing offence. If causing offence was a crime in Australian, then Andrew Bolt would have several life sentences.

But feminists are always targeted when we raise our voices, whether for political reasons or even just when we say, ‘I am a feminist’. We are often laughed at, ridiculed, despised and, as seen in the case of Pussy Riot, dealt with in such extreme ways. In effect, such a response towards us is saying shut up, don’t have opinions and certainly don’t feel the right to express them.

Perhaps what is even more frightening is the historical references related to religion and the burning of women accused of being witches. One of the prosecutors described them as ‘dangerous feminists’ with feminism a mortal sin. Those who oppose Pussy Riot held a protest where posters of Pussy Riot were burnt. This particular protest was a combined effort between three Russian Orthodox groups. A leader from one of these groups said that ‘we are going to rip them up and burn them . . . like in the Middle Ages.’