the politics of servicing a car in a gendered world 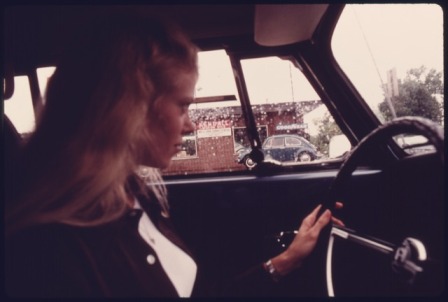 Before I moved out of home, we would take my car to a local guy to get it serviced, and whenever we’d pick it up, the mechanic would always address my Dad when reporting on his progress with the car that was in my name – that I drove.  This same guy would not let his daughter, who I went to school with, join the family business and become a mechanic, even though that’s what she really wanted to do. So, I have been going to my new mechanics because, although it is apparently more expensive than some other places, the workers (all men) are more approachable and professional (read: not sexist hacks). I got my car serviced, with the outside doorhandle replaced (it’s a long story), a few months ago and it cost me $527. That’s almost two weeks’ wages. As I live entirely on Mi Goreng, a recent study has emerged that has made me question my automotive repair experiences, past and present.

North-Western University’s Kellogg School of Management in the United States has conducted a study that found that women are more likely to be overcharged, or quoted a higher price for car repairs. The study involved participants contacting 4,603 auto repair shops, asking for a price quote on a radiator replacement for a 2003 Toyota Camry. Initially researching information irregularities and the reasons customers receive different price quotes from mechanics, the customers either indicated that they were familiar with the going rate of such a service, were completely unfamiliar, or were aware of a price that was wrongfully higher than the market rate.

The study found, perhaps unsurprisingly, that if you have a higher price in mind, you’re gonna have a bad time. But there didn’t seem to be any difference whether you had no clue, or if you knew all the things – either way, you got a reasonable quote. That’s if you’re a man. Alternatively, women were more likely to be charged a higher price if they did not indicate prior knowledge about the going rate of the job. According to researcher Meghan Busse, ‘shops believe, rightly or wrongly, that women know less about cars and car repair. In the absence of information to the contrary, they will be offered a higher quote’.

So the advice, ladies, is to get familiar with your sump plugs and head gaskets (I don’t know what either of these are) and get your pretty little heads around the going rate of a transmission repair and standard oil change, because if you do, you’ll be charged the rightful amount. Just as long as you throw in some of these words and make out you know your stuff. Because, according to this study, it seems that if women have no idea, then they really have No Idea. Whereas when men appear to have no idea about cars, the mechanics just think they’re being strategic about it. Sneaky.

So maybe when I got my big $527 bill I should have questioned it/haggled/batted my eyelashes, because this study also found that when women negotiate prices with mechanics, they are more likely to receive a discount. Is this a good thing? (We’re all street-wise, fast-talkin’ lady-lawyers who run in heels). Or just special treatment? (We’re all delicate lady-flowers who need to be showered with compliments, affection and kittens). So much for gender equality if, as a woman you can basically pull out your lady-concession card and get cheap stuff because you’re pretty/have a vagina/nice smelling hair. Then again, considering the gender wage gap and all, maybe we should just cash in on these things. Hell, buy me that drink, shout me dinner/movie, and fix my car half price. What’s a young feminist to do?

Busse stated that mechanics aren’t a bunch of misogynist pigs that are out to rip women off because patriarchy: ‘It’s easy to imagine employees in male-dominated work environments like car repair shops succumbing to gender stereotypes.’ This is a fair point. We still live in a society where stereotypes about men and women that are long outdated still have paradoxical cultural currency and can have a tangible impact on our daily lives.  Women can’t drive and don’t know anything about cars. Men know all there is to know about cars, mechanics and engineering. They can also read maps while women ask for directions. One thing that can be taken from this study’s findings is that when we prove stereotypes wrong, everyone acts like reasonable human beings and the world becomes a better place. Now, excuse me while I go and Wikipedia sump plugs and head gaskets…