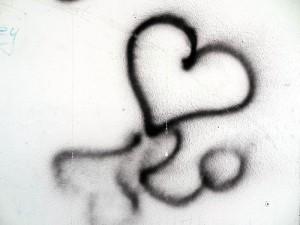 There’s something about the prevalence of love triangles in young adult fiction that doesn’t sit well with me. Don’t get me wrong – I’m not against romance. I love love, Elizabeth and Mr Darcy, Kathy and Heathcliff, Romeo and Juliet.

But there’s a big difference between a romance and young adult fiction with romantic subplots. Again, I’m not against these subplots. That is, if they contribute to the story, feel natural and serve some kind of purpose.

I feel that the love triangle has almost become a prerequisite of Young adult fiction. There are exceptions, of course. The Book Thief, The Fault in Our Stars and Puberty Blues are wonderful examples of insightful, interesting literature without these elements.

But we only need to take a look at popular books for young adults to see that there is an undeniable trend happening; a trend that barely varies from the stereotypical female protagonist having to choose between two very different, and gorgeous, male characters.

I’ve heard people call it empowering. Feminism means the right to choose, so by choosing between two, three, even four guys, the heroine is completely and totally empowered, right?

My problem here is not the choice, it’s the options available. Let me use an example.

I love The Hunger Games. It’s a wonderful example of young adult literature that gets people thinking. What is war? What is rebellion? And when is anything ever justified? I find the characters to be real and their reactions plausible. Katniss Everdeen is a strong, independent female protagonist, far from flawless, yet so humanely relatable.

Why, then, must she choose between two guys?

The romance (or lack of) between Katniss and Peeta is a huge part of the story. It’s tied to the plot so tightly that the story would unravel without it. And I love it. I think it explores Katniss’s feelings in an ongoing, reasonable way. This is not instalove, this is The Hunger Games. And Katniss Everdeen has more important things to ruminate about than boys. She needs to keep herself alive.

Unfortunately, for me, Catching Fire began to play up the love triangle a little too heavily. Since when was Gale a love interest? Weren’t they just best friends? In the first chapter of The Hunger Games Katniss says:

‘There’s never been anything romantic between Gale and me. When we met, I was a skinny 12-year-old, and although he was only two years older, he already looked like a man. It took us a long time to even become friends…’

And yes, I understand that this may be a case of the unreliable narrator. She’s telling herself that for now, where there may be some feelings hidden deep down. Still, I don’t buy it. When Katniss finds herself stuck between Peeta and Gale, the obvious choice is not there.

She doesn’t have to be with either of them. And ultimately, why does a love triangle need to be exclusively amatory love?

Katniss always felt conflicted about Peeta. She didn’t feel for him romantically for a lot of the time. Having to pretend, and lie to him inside the games, put a strain on their relationship and her feelings as a whole.

So why does Gale need to come into things? Is it not okay for Katniss to feel conflicted about whether or not she wants to be with Peeta, regardless of Gale?

The Gale/Katniss romance never occurred to me until explicitly implied in Catching Fire. In fact, it hadn’t truly occurred to author, Suzanne Collins, either. In an interview with her editor, Kate Egan, Egan states that it was her idea to play up the romance.

‘I asked her for more of the Peeta-Katniss-Gale love triangle,’ says Egan in an interview with Sarah Laurence. ‘Suzanne was more focused on the war story.’

And how would the story have changed if Katniss and Gale were nothing more than best friends? Or if they were cousins, like they pretend to be in Catching Fire? To me, there wouldn’t have been much difference. There would still be tension. Katniss would still have her two worlds, completely conflicting. There doesn’t need to be a love interest in each world for her worries to be validated.

A love triangle can still exist without each corner infused with romance. As a best friend, Gale would still have been a part of it, just not romantically. A woman’s choice doesn’t need to pivot around her romantic feelings. As we’ve seen with Prim, the love for a sister can be just as strong, if not stronger, than romance.

The Hunger Games ticked so many boxes for me. It was new, exciting and thoughtful. But a love triangle, differing from the romantic explosions from Twilight to The Mortal Instruments, would have ticked one more.

A strong story like this didn’t need it. The conflict was bold enough, but the choices were limited. The story would not have wavered had Gale’s influence been the love of a relative, or the unconditional love of a friend. For me, it would have made the story stronger.

One thought on “thoughts on the hunger games: are love triangles killing young adult fiction?”