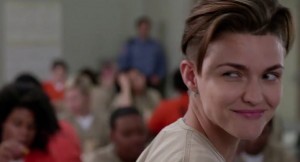 Two weeks ago—after months and months of anticipation—Netflix released online the entire third season of Orange Is The New Black, prompting one of two reactions from fans:

a)    Watching all 13 episodes in under 24 hours, then proceeding to frantically vent about all of the feels on every single social media platform available. Or, conversely,

b)   Avoiding all forms of communication with the outside world like the plague because you hadn’t yet found time to finish the season, what with vastly less important commitments like studying and working and sleeping getting in the way.

Australians were especially eager about the season’s release because of our excitement at seeing one of our own on the screen. The understated debut of Ruby Rose into the series—Australian model, DJ, TV presenter, actress and general lesbian icon—elicited an unprecedented uproar. Not only was new inmate Stella Carlin steadily winning hearts and enemies within Litchfield’s infamous prison walls, but she was causing a huge furore across social media on the outside world.

‘Would go lesbian for Ruby Rose in a heartbeat’;

‘When u think ur straight but Ruby Rose comes and confuses you’;

‘Ruby Rose: *exists* Me: wow I am a lot more queer than I originally planned’.

All of a sudden, my Facebook newsfeed was flooded with selfie after selfie after ‘post-work-out’ and ‘I woke up like this’ selfies of Ruby Rose. Photos dated as far back as 2011. It seemed like everyone on my friends list—regardless of gender or sexual orientation—was getting on the Ruby Rose bandwagon. And don’t get me wrong, I’m not complaining. Like, at all. Ruby Rose is ridiculously attractive. The presence of her face in my obligatory morning newsfeed-scroll was something I welcomed eagerly—though slightly disappointed that it was only virtual. Even my grandmother or my pet cat could probably appreciate Ruby Rose’s genetics. And if I weren’t already attracted to women, I have no proof that learning of her existence wouldn’t have sparked within me intense feelings of homoeroticism too.

For heterosexual women to claim gay conversion after laying eyes on an attractive woman is not the most serious threat to have ever been made against lesbian identity. By far. If anything—and this has been argued by social commentators such as Clementine Ford, and by Ruby Rose herself— through embracing sexual fluidity, even if it’s just hypothetically, we are taking a step in the right direction. Plus, for heterosexual women to acknowledge their attraction to other women, however superficial, suggests that there exists a newfound openness in exploring the complexities and mysteries of sexuality. Which is great. Rose is (of course, naturally) supportive of how the public has responded, stating that it’s ‘brilliant because a lot of people can say it now who actually mean it and it not kind of be a big deal on them [to come out]’.

It’s highly doubtful that the people making these statements literally plan to ‘turn gay’ for Ruby Rose, or for any woman for that matter. It’s also doubtful that they purposefully seek to trivialise lesbian identity, or proclaim homosexuality a choice or a whim. As this Daily Telegraph article recognises, a lot of these people are probably the same ones who stand up as allies for the LGBTI+ community, people who are rallying in support of equal marriage and other socially progressive causes.

Furthermore, declarations like this are not new. Probably a few decades ago, they would have been outright condemned. Nowadays, being able to speak openly about sexuality should be something to celebrate. And the LGBTI+ community at large is facing problems far more serious than women claiming to ‘turn gay’ for other women. In fact, the whole deal seems quite petty when you put it in the scheme of things and give it a little perspective.

However, proclamations of ‘turning gay’ reveal a certain misguidedness that – although not dangerous in itself – is indicative of a societal attitude well-worn and all too familiar to lesbians. Collectively, those on the LGBTI spectrum have faced pretty much constant speculation and erasure. And arguably, lesbians have had a doubly hard time, which will be discussed shortly. In addition to being same-sex attracted, we are also women, and so our lack of sexual desire for men necessarily becomes a patriarchal issue as well as a heteronormative one.

Something serious to take away from this discussion is a reflection on the nature of identity. There is nothing wrong with sexual fluidity, but to reinforce the idea of ‘turning gay’ could be said to suggest that if lesbians aren’t willing to be sexually fluid then there must be something backward or closed-minded about them. Sexual fluidity is for some, but it is not for all. Historically, we have had to fight incessantly to defend our love for women, and have been subjected to erasure, dismissal, disbelief and violence because our sexuality does not revolve in any way around men.

I reiterate: sexual fluidity is a very real and valid concept. The overarching sentiment that ‘labels are for soup cans’ is one that many people in modern society have eagerly embraced. Those who identify as fluid often feel they are able to more freely explore and express themselves and their attractions to others, regardless of sexuality and / or gender identity. All the more power to them, I say.

The purpose of this criticism is not to delegitimise anyone’s identity. Rather, it seeks to remind people that although they may feel comfortable defining themselves as ‘sexually fluid’, ‘label-free’, ‘heteroflexible’ or some other variation on the concept, lesbians do not have this privilege.

I call it a privilege—or a luxury—because in many ways, it is just that. The public sphere has become vastly more accepting and accommodating of difference, but this goes hand in hand with the Western theme of ‘choice’, and how choice equates to power, liberation and progressiveness. Having the ability to make autonomous choices is a vital facet of socially progressive movements. However, when it becomes too much associated with sexual orientation and identity, conversation is wont to enter into murky and entitled territory. And as such, lesbians’ fight to defend their innate and exclusive attraction to women has arguably become more relevant than ever.

People claiming to ‘turn lesbian’, however indirectly, are dismissing this struggle. We need to recognise that there are ways to explore sexual fluidity and attraction without undermining the identity of other demographics.

One thought on “‘turning gay’ for Ruby Rose: progressive or problematic?”