why I hate the term ‘feminazi’ 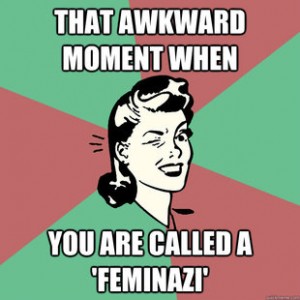 This article originally appeared in Lip Issue 22 – you can buy a copy of the mag here. We promise it’s packed full of other goodies!

Here’s a term that makes me want to rip my own face off every time I hear it – feminazi.

It’s a term that people use when describing a woman who is an outspoken feminist, and is probably about to tell them something they don’t want to hear (usually that they’re sexist).

The term ‘feminazi’ has become more ubiquitous in popular culture lately, much in the same way that the term ‘grammar nazi’ has become more common. Frankly, I think that using ‘nazi’ to describe anything or anyone other than an actually nazi is incredibly offensive anyway, but there are other reasons why feminazi really, really frustrates me.

Here are the main reasons why my blood curdles every time I hear the term:

1. Calling someone a feminazi is intended to shut them up. By saying this, you are negating their words, and disparaging their thoughts as being oppressive, fundamentalist, and over-the-top. Rather than addressing whatever outrageous thing they’re actually saying (once again, probably that you’re sexist), you’re choosing to instead downplay their point and accuse them of being uptight instead.

2. Comparing feminism to Nazism is just offensive. There are no two ways about this – feminism is a movement for equality. Nazism was the exact opposite. There is nothing dictatorial about feminism – the view that men and women should be equal is not oppressive. I can’t say this in any other way. By using a term like ‘feminazi’ to describe feminists, you’re turning the movement on it’s head, and making it about the oppression of men rather than the freedom of women. Until feminists start using war machinery and gas chambers in our quest for equality, I don’t think this comparison will ever be fair, or inoffensive.

3. Claiming that feminists are ‘feminazis’ is really just a way of saying that they’re uptight and need to loosen up. Any feminist who has said a single thing against sexism in public has undoubtedly had some smartass respond with something like ‘hey, loosen up’ or ‘live a little’ or ‘don’t you believe in fun?’. Actually, I do believe in fun – I just don’t think it’s particularly fun to be sexist, or believe sexists things, or respond to someone pointing out that you’re being sexist by being more sexist to them. Actually you’re right – I am just one boring bitch, clearly.

4. The term feminazi is obviously a patriarchal construct, designed to create a view of feminism as being extreme, threatening to the status quo, and generally ridiculous. There’s no better way to negate the power of a movement than to create a view of it as being both unnecessary for society, and generally ludicrous. If every feminist who dares to speak out against sexism is treated as if she is being a hysterical woman speaking out of turn, then of course the legitimacy of what she may be saying is negated. It’s a clever move, patriarchy.

I mean, let’s face it. After reading this article, the average person might call me a feminazi. And I think that’s the actual biggest reason why I hate the term so much – it makes people less likely to advocate feminist thought because they don’t want to be called a nasty, derogatory name.

Feminism already has a ‘bad name’. Not because of anything within the movement that I can pinpoint as having been oppressive or forceful when it comes to gender equality – but because people don’t like things that challenge the status quo, and they especially don’t like women who diverge from what is considered socially acceptable female behaviour.

Young women especially suffer from this – when you’re my age (ripe old age of 22), you yearn to fit in. When you’re at high school or university, you want to be accepted by your peer group. You are unlikely to start espousing views that are probably going to get you branded as a ‘feminazi’.

If I have to hear one more person say ‘I’m not a feminist, but…’, I might spontaneously combust, but I’m not unaware of the motives for distancing oneself from feminism. We all want to be liked – that’s natural. And apparently being vocal about gender equality makes you seem somewhat obnoxious, particularly at parties or nightclubs (not that that’s ever stopped me from clambering onto my soap box).

But terms like ‘feminazi’ are oppressive on the most basic level. They create a paradigm within which being sexist is no big thing, but calling someone out on it means you’re being unreasonable, inappropriate, rude even.

They deter young women from speaking out against very real inequalities, for fear of being branded by a term that implies that they’re humourless, unfeminine and difficult to deal with. Worse than that, they deter young women from speaking out because they fear they won’t be taken seriously – a very real fear. No discussion of the issues raised by them will ever occur if their dissent is faced with a casual insult like ‘feminazi’.

It would be easy to take this entire article and point to it as a typical ‘feminazi’ moment in a way – making a big deal out of what is essentially just one word, used mostly in jest perhaps, just a word that sometimes gets thrown around.

Well, the first thing I learnt from feminism is that there’s no such thing as ‘just a word’. Words have power.

35 thoughts on “why I hate the term ‘feminazi’”