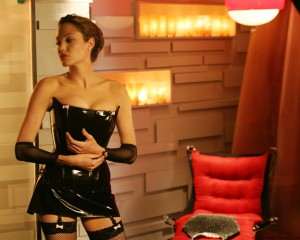 She struts onto the screen. Leather clutches her hourglass figure, squeezing her tight; her breasts billow out of her shirt. She seductively glances at the man before her. He is incapacitated by her fishnet stockings and whip, reduced to a drooling, drivelling, mess. She slinks towards him, strokes his cheek and melts him with the feather kiss of her breath. And this is how Angelina Jolie is able to snap the bad guy’s neck.

As he falls face first to the floor, you think one thing: Holy shit, Angelina Jolie just killed that guy with her sexy.

In the past few decades, portrayals like those of Angelina Jolie in the above scene from Mr. & Mrs. Smith have become a Hollywood norm. Gone are the days of the passive, sexual object we came to detest in films like Diamonds are Forever. Today, female characters assert themselves as active, sexual agents who gain power over men by sexually arousing them.

Everywhere we look, men are sweltering under the heat of woman’s natural sex powers. The Avenger’s Natassia Romanoff, Kill Bill’s The Bride, Michaela Banes from Transformers, and all three of Charlie’s angels are classic examples of this phenomenon. Even in the comedic hit, Mean Girls, Regina George has men carrying her through the school on their shoulders with a flick of her hair. Portrayals of women as sexual agents have become so pervasive that we now have to ask: ‘What is this doing to our minds?’

Some people argue that these portrayals are having a positive effect on the way women perceive themselves. Mainstream depictions of sex-positive, female empowerment are the realisation of goals identified by feminist writers like Wolf and Butler.

Psychologists have postulated that such depictions play a role in normalising female sexuality, liberating women to express and act on their sexual desires. Since Jolie-esque representations hit our screens, women have been buying more sex toys, and some reports say that they are feeling more sex positive. Understanding one’s body as a vehicle of power may also award the female viewer a sense of confidence and autonomy.

However, recent psychological research suggests that the treatment of women as sexual agents in Hollywood films might not be the utopia feminist critics were after.

One of the main issues is called ‘self-objectification’. A quick way for directors to establish the seductiveness of a woman is to emphasise her attractiveness. The camera pans up Jolie’s figure, lingering on her lips and hips. Many modern psychologists suggest that female viewers internalise this ‘male gaze’. We learn to evaluate ourselves as though we were an onlooker. When we walk down the street, we focus on our appearance to others, rather than on our own feelings because that’s what we’ve been taught to do.

There’s a high chance that self-objectification will lead to discontentment with our bodies, as we compare ourselves to Hollywood’s narrow-minded definition of ‘sexy’.

Unfortunately however, sexual-objectification isn’t the only problem. The greater problem is the underlying message: women can only access power through being sexually attractive.

When we watch a movie with a female protagonist, it affects a process called self-imaging. We use these characters as role models to shape the way we imagine our future selves. If we are constantly exposed to women who gain power through their sexuality, we are likely to see our own power as dependent on sexual desirability, rather than our other traits.

Really, it’s little wonder that women are increasingly prioritising sexual attractiveness. Since the advent of sexualised portrayals, women have demonstrated an increased consumption of products which are marketed as ‘sexy’. Sales of high heels and padded bras have risen, girls are wearing make-up younger and younger and plastic surgery, especially breast and butt enhancement, has become a norm.

We may also begin to depend on the male gaze to feel powerful. Young girls and women are increasingly reporting that they’d like to be models, strippers or sex workers rather than nurses etc.

Beyond all this, there is something more disturbing at play when we see Angelina snap that guy’s neck. The message that we can only gain power through appealing to male sexual whims is simply another way of confirming the supremacy of men. The male always has power in this relationship, because the only way for the female to become more powerful than him is to modify her looks and behaviour so that they satisfy his desires, not her own.

I want to see more mainstream films in which female protagonists gain power through their charisma, intelligence and tenacity. I want to see representations of powerful women where their power doesn’t depend on their ‘sexiness’. My personal power shouldn’t be interfered with to any extent by how tight my ass looks in that power suit, or how great my boobs are. Implying that it does is psychologically damaging, and perpetuates a power hierarchy in which in order to become a subject in our own right, women must first be man’s object.

So please, Angelina Jolie, stop killing guys with your sexy; kill them with your personality and abilities instead.