yet another important lesson from humans of new york 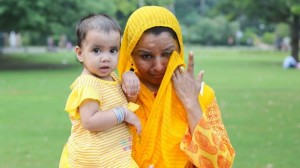 Image via Humans of New York

I recently wrote this article for Lip to analyse the findings of a study into youth mental health in Australia. The results sent me reeling, though I’m not sure if it was to do with the uncomfortably high numbers or the sickening feeling that came over me when I considered a child as young as four experiencing the violent throes of severe mental illness.

I began frantically searching for some evidence that we were tackling this, locally, nationally, globally. From whatever angle or opinion. Anything. The most readily available solutions seemed to come in the form of either cashed-up self-help gurus, expensive pharmaceuticals prescribed more readily than ever by our general practitioners, or expensive psychological intervention that is almost completely out of reach for those in tempestuous financial situations.

And then I saw this Humans of New York photograph that went viral. Pictured is a woman clearly suppressing a flood of anguish, her hand raised to her face to seemingly erase her tears as evidence of her faltering. In her arms is a little girl, staring at wonderment at the camera and seemingly oblivious to her mother’s state of affairs. ‘I left an abusive relationship and I have nowhere to go,’ reads the caption. ‘I have Hepatitis C, so no one is willing to take me in. I don’t know how long I will live. I tried to give her up for adoption so that she’d have a good home. The wife of a minister told me about a place where I could drop her off. But when I got there, I just couldn’t bring myself to do it.’

Within minutes of the photograph being published, hundreds of people who had no idea of her existence just moments before were suddenly reaching out with offers of accommodation, financial support, moral support, food and medical help. Just like that, with a whole bunch of strangers to take a little of the burden, suddenly this chaotic mess that life can often twist itself into seems less daunting. The pressure is lifted mentally, physically, emotionally. This woman, at least, is far better equipped to deal with her trauma thanks to the support from an online community. Lucky, yes, that Brandon Stanton (the man behind Humans of New York) found her, photographed her and published her story. But it isn’t just luck. This woman raised her voice and asked for help, and her bravery has been rewarded with an outpouring of support.

This little anecdote, certainly a display of the virtues of humanity, also provided a potentially significant candidate for an antidote to these absurdly high mental health statistics. The whole way we look at mental health clearly requires reassessment, and perhaps our ability and willingness to honestly reach out for help is one of the biggest hurdles to overcome. Asking for help from those around us, or reaching out to a dedicated online community, is one of the most powerful tools we have in overcoming our collectively deteriorating mental health.  True, depending on the context, an immediate peer group might not be the healthiest or most available support network to turn to in moments of darkness, but the second lesson we learned from this HONY experience is that social media is not always the evil, lecherous beast that I am guilty of making it out to be.

This woman was helped by people she doesn’t even know, might never even meet. These people are strangers, good people witnessing a situation they have the resources to assist with and jumping on it with vigour. The digital age may be tearing us apart in some respects, fragmenting our immediate reality, but perhaps this is the way we are evolving to cope with the separation we’re experiencing from ourselves and one another. Perhaps we are building a new shapeless, colourless community, creating something new to fill the void that the modern lack of community has left within us.