on the run, on my own: the long way ’round

When I think of backpacking, I think of dragging a battered backpack along the road and changing from buses to trains to coaches to trains to buses. I’m not sure if this next admission will make me lose my Backpacker Cool Points (Ha… like I had any of them) but in the whole time I’ve been in Australia, I had never done that.

Until this week. And then I did it twice in one week.

As I mentioned in my previous article, I’m currently based in and around Melbourne for the last stretch of my trip. I think I’ll always be a country girl and while I like Melbourne as a city, I was keen to explore the surroundings.

Seeing as I don’t have a car, I had to rely on Victoria’s public transport, which meant hefting my bag to Southern Cross, a train to Ballarat, a coach to Stawell and then a bus to Halls Gap. The distance from the city seemed to correlate with the quality of the air conditioning and as the bus pulled into Halls Gap, I was almost passed out from heat exhaustion. But I was looking forward to being in the countryside, I was thrilled to be surrounded by trees, mountains and… jazz.

You see, I uhh…perfectly timed my trip to coincide with the 50th Anniversary of Halls Gap Jazz Festival. I like to think I’m pretty open minded when it comes to music and I’ll give everything a listen to once, but I’ve never really gotten jazz. But, saying that, I did meet up with two girls (and probably the only other people under 50 in Halls Gap that week) and we stood outside a tent in the rain and tapped our feet a little.

Needless to say, I’m still not a jazz fan but it wasn’t as bad as I thought. And at least I can say I attended the 50th Anniversary Halls Gap Jazz Festival. If that isn’t something to tell your grandchildren, I don’t know what is…

Anyway, armed with my banana, water, peanuts and Cheryl Stayed attitude, I set off to clamber up perhaps the most famous walk in the Grampians: the Pinnacle. If you’ve ever been to this area of the world, you’ll know how gorgeous this area of Australia is. Undulating mountains stretching out across to the misty horizons, scorched black trees sprouting with new growth, the dinosaur-scale rock formations and cuddly wallabies bounding across your path and making you jump so much you almost plummet to your death. 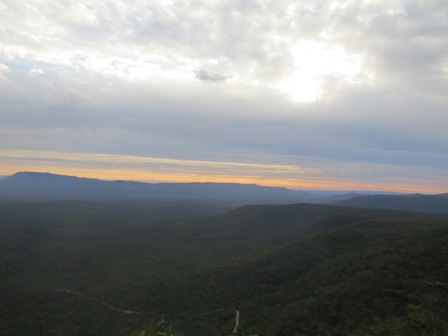 That is, until I got lost.

Now please don’t ask how I got lost. Every single person I’ve spoken to has asked me how one gets lost on the most popular walk in Halls Gap. But I did, OK? I think I was too busy trying to take as many pictures as possible and didn’t realise that I was somehow following my own nose and not the yellow triangles. But after a scramble down a cliff, and then a scramble back up the cliff, I decided the safest way to return to the hostel (where tea, chocolate and sleep awaited) was to just turn back and go the way I came. My “ease myself into it” walk ended up being a 14k+ walk on only two litres of water…

Oh well… look at the views! I did two other walks which, thankfully, were less eventful, but the scenery was just as spectacular! I wish I had had more time in Halls Gap but I’m just going to add it to my list of places to return to when I come back to Australia.

My other trip was to the Mornington Peninsula. This time, it was only a train and a bus but I was having one of those days where everything that could go wrong seemed to go wrong. I had an early night and then woke up early, deciding to make the most of my single day here and seemingly energised by my jaunt in the Grampians.

I walked from Sorrento to the tip of Point Nepean, the absolute end of Mornington Peninsula. It was a gorgeous walk and, being the unapologetic history geek I am, I loved the rich history surrounding the place. As I walked, all around me were references to the time when the Mornington Peninsula used to be one of the most important military bases in Australia. When I returned to the hostel, I fell asleep for ten hours. Ten hours. I haven’t done that for a long time. Even though the week exhausted me, it was one of my favourites while I’ve been in Victoria and, as I returned to the city on a crazily busy tram at Flinders Station getting scowls because of my massive bag, it reminded me that it’s nice to go off the beaten track sometimes. 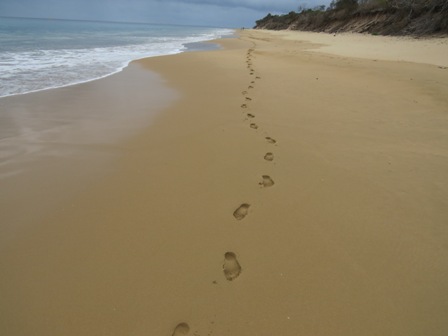