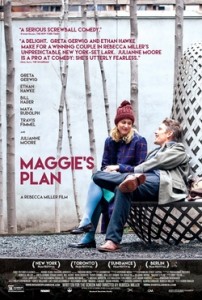 The inimitable Greta Gerwig stars in Maggie’s Plan, a colourful comedy about a woman who is always in control. Gerwig is great at playing characters that have no idea what they’re doing (like the titular character in Frances Ha), but in this film, she proves she can also play the opposite. Maggie, a university graduate mentor, has a plan for everything — including how she is going to have a child without needing to wait for a relationship.

When the film begins, Maggie has selected a sperm donor (former classmate and ‘pickle entrepreneur’ Guy, played by Travis Fimmel) and is going ahead with artificial insemination. The wheels are in motion when she happens upon John Harding (Ethan Hawke), a brilliant yet frustrated academic. John is also a frustrated novelist and unhappy in his marriage to fellow academic Georgette (Julianne Moore). He is worn down by her professional brilliance – seemingly because it is greater than his – and exists in a perpetually distracted state.

Maggie and John quickly become close, and when he asks her to read a draft of his novel, she falls in love with both the book and the man. They begin an affair and Maggie’s wish for a child comes true. Fast-forward three years, and Maggie and John are married with a daughter of their own, sharing the parenting of John’s two other kids with Georgette. Things seem to have worked out very neatly, but Maggie finds herself unhappy. Leaving aside the existence of her daughter, she wonders if things were better before. Enter her next plan: get John and Georgette back together.

You might forgiven for thinking this film would be full of clichés; after all, the idea of a creative man stifled by his unloving wife who turns to a younger woman who worships him is not exactly groundbreaking. But as the plot takes increasingly unexpected turns, Maggie’s Plan presents a much more nuanced take on the relationships at its core. Georgette turns out to be perhaps the most likeable character, and when the gloss wears off Maggie and John’s relationship, we see that Georgette was never the problem. Maggie makes difficult choices and lots of mistakes, but she is determined to stay true to herself and give her daughter a life that is real.

What makes the film especially endearing is that it makes fun of itself at every turn. The celebrity-like fervour that surrounds Georgette and John’s academic careers, especially John’s ‘ficto-critical’ field of anthropology, pokes fun at academia (in a mostly loving way), and the pickle business run by Maggie’s would-be sperm donor is the perfect twenty-first century New York cliché to gently mock.

The movie  has plenty of real emotion, though. When Maggie’s various plans start to unravel, Gerwig and Moore beautifully portray the feelings at stake. And just as it is the female characters who are in control here (Hawke’s John is just along for the ride), it is also the female actors who make the film shine. The same is true for the supporting characters; while Bill Hader is fine as Maggie’s ex-turned-friend Tony, Maya Rudolph stands out in her role as Felicia, Tony’s wife and Maggie’s other best friend.

Women were also driving this film behind-the-scenes. It was written and directed by Rebecca Miller, who based the screenplay on a story by her friend Karen Rinaldi. Miller told FilmInk that she nearly called the film ‘Confusion’, a word that captures a lot of what this film has to say. In some ways, it was disappointing that the story didn’t follow its original premise of Maggie having a child alone, because it would have been an interesting story, but the unexpectedness and messiness of the final plot is what gives the film a sense of (imperfect) reality.

As well as its warm and funny characters, the film has a carefully crafted and endearing New York aesthetic; Sam Levy‘s understated cinematography makes watching Maggie’s Plan all the more pleasurable. There is also a nice contrast in the two lead female characters’ wardrobes: Maggie’s mismatched op-shop wardrobe versus Georgette’s cutting-edge European style. Pace-wise, the time leap early on is somewhat jarring and the film takes a while to settle back in, but it finds it rhythm again once the audience realises the less-than-perfect state of Maggie and John’s married life.

Maggie’s Plan has a lot to recommend it: sharp humour, strong performances, and a clever ending that reminds us just how incapable we are of planning our fate. Fans of Gerwig will not be disappointed (she is as captivating as ever); nor will anyone looking for a film with lots of heart and just the right amount of silliness.