the magic hour: a one woman show about fairy tales, compassion and the voices we forget 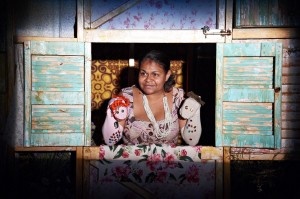 The Magic Hour is a one-woman show about fairy tales like you’ve never seen before. Written by Australian playwright Vanessa Bates , directed by Chris Bendall and starring widely acclaimed actress Ursula Yovich, the play was initially produced by Deckchair Theatre Company in Fremantle in 2010.  Now, in 2014, theatre company, Performing Lines, is taking the production on a national tour.

“The Magic Hour is essentially a story about a gypsy woman who drags her caravan into town, makes soup and begins to share stories with the audience”-  playwright Vanessa Bates tells me when I caught up with her for a chat about the production, which incidentally, is the first one woman show she has ever written.

Fairy tales have been around for centuries- handed down from generation to generation, often containing serious messages and moralistic undertones. We all know what befalls young girls who stray too far off the ‘path’, or what happens when the golden goose is slaughtered out of greed. Bates isn’t interested in re-telling fairy tales per se, she is more interested in telling the stories of the sideline characters- the ones we don’t pay any attention to, or even remember all that well.

“I was really taken with the characters who were not the main characters, such as Red Riding Hood’s grandmother or the mother in the Frog Prince…it’s a funny yet sad piece and at one point one of the characters laments the fact no-one will remember her- ‘I’m not even in this story’, she says”

After years working at Big hArt, Australia’s leading arts and social change company, it’s no wonder that Bates feels compelled to tell the stories of those in the margins. In fact,  this production was inspired by the women she met through her work at the organisation.

“The play was inspired by a lot of the women I met working at Big hArt- in a sense it is a celebration of these women who have been through so much yet possess so much strength, courage and resilience. They’re incredible”.

As incredible as these women are, they also represent some of society’s most vulnerable and marginalized. And with the proposed Federal Budget measures, this marginalization is only set to get worse. Vanessa believes, that just like the sideline characters of fairy tales, the voices of Australia’s most vulnerable are likely to be ignored and, in time forgotten.

“This play is about caring for other people, people who are becoming more and more marginalized. It’s asking audiences to have compassion. These people who have been pushed to the margins- they’ve got stories too and we need to listen to them…someone referred to this production as a cross between Brothers Grimm and Trainspotting [laughs] and in a way, it’s true!”

Beyond this though, Bates insists that the play is not a morality tale itself-

“It was written to be entertaining and that’s the ultimate goal. If the audience comes away feeling like they’ve learned something, well, that’s just a bonus.”

The Magic Hour is showing at The Street Theatre in Canberra  from July 4-6.