welcome to the dollhouse collective: a new all-female production company 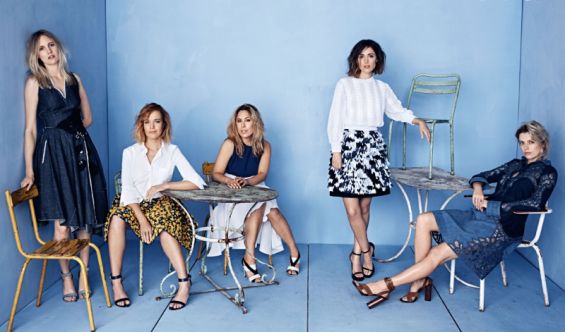 The group, made up of  Byrne, actress/director Gracie Otto, actress/writer Krew Boylan, director Shannon Murphy, and publicist/producer Jessica Carrera, has been put together with one aim in mind: to redress the film industry’s gender imbalance.

Fighting sexism in Hollywood (and the greater film industry) is no small task. A report on the Diversity Gap in the Academy Awards for 2014 drew attention to the white male dominance of producers, writers, actors, award winners and award voters in the Academy. The enormity of the Collective’s task is best summed up by factoids like Kathryn Bigelow being the only woman to ever win an Oscar for Best Director, an accolade she earned for her testosterone-heavy 2008 film The Hurt Locker. Statistics for the Australian film industry are harder to find, and somewhat out of date (the last report on women in the industry conducted by the Australian Film Commission was released in 2008), but paint a similar picture of inequality and gender bias.

With the odds stacked against them, it’s heartening to see that the women have chosen to band together to fight the industry’s sexism, rather than perpetuating tired old myths of women being in competition with each other. On the front page of their website, in bold, unambiguous language, the women outline their approach.

‘We come together under one roof. Five female filmmakers committed to exploring the creative boundaries of film, TV and theatre. We champion change, we value relationships, we advocate artistic collaborations. We are risk takers, friends, and passionate storytellers.’

If the problem is that there are too few roles and opportunities for women in film, it makes sense to work to create more space for women, instead of tearing each other apart in order to be a part of the boy’s club.

It will be interesting to see how the Collective’s mission unfolds. With a trio of projects already in production, it seems the group are keen to get the ball rolling.

There are, however, some concerns. To go back to the Oscars for a moment, an arena where feminism and women’s representation has been increasingly hotly debated, I find myself thinking of the moments when attempts to bring feminism to the forefront of discussion went awry. Patricia Arquette, in her acceptance speech for Best Actress in a Supporting Role for her performance in Boyhood, called for equal rights for women in the United States of America. It was a well-intentioned, fine use of a public platform. She immediately faced backlash.

Let me be clear, I am not saying that fear of recrimination should keep women silent – far from it. The problem with Patricia Arquette was not that she called for equal rights for women, but the narrow scope in which she did it, and the position of ignorance from which she spoke. Her comments on stage and backstage, were critiqued for ignoring the work women of colour have done in the fight for equality, comments that played into tensions about the focus feminism has had, historically, on the rights of white women above all others.

Patricia Arquette is not a part of the Dollhouse Collective, but she is emblematic of the kinds of issues I hope the women take into account when waging their war on sexism in the film industry. To help out women in the film industry, they need to remember to help out all women. Their projects, so far, all involve one another, potentially creating a new “club” that outsiders will struggle to penetrate.

The Dollhouse Collective are young, beautiful, able-bodied women; women who have an extraordinary amount of privilege. It is encouraging to note that, in forming this organisation, they seem to be aware of it, and want to do good things with the power they have.