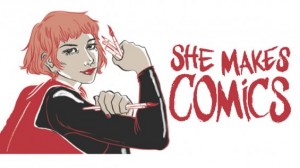 Checking my email one night, I came across a Kickstarter project that sounded awesome. Showing it to my partner, I said, ‘Doesn’t it sound great? A documentary about the untold history of women in comics. Creators, writers, illustrators, fans, the whole lot.’

My partner’s reply: ‘There are women in comics?’

This exchange is an example of exactly why She Makes Comics, a documentary-in-the-making about womankind’s contribution to the comic book industry, is so sorely needed.

The graphic novel world is popularly considered to be a boy’s club; a dingy basement with a ‘No Girls Allowed’ sign on the door. Just think of all those Big Bang Theory jokes every time a female character walks into a comic book shop: women are not supposed to have a place in this world. They’re supposed to be still trying to fight their way in.

She Makes Comics shows that they’ve always had a place in the world of graphic novels, and they’ve been instrumental in shaping the experience all along.

Already director/producer team Marisa Stotter and Patrick Meaney have interviewed subjects from major players (like Joan Hilty, former editor at DC Comics, or Karen Berger, founding editor of Vertigo) as well as women from the indie, underground side, such as 1970s artist Joyce Farmer.

If you’ve never heard of these women, well, that’s kinda the point: Stotter and Meaney want to elevate these unsung heroes to the level of Stan Lee, to give the rarely-given credit where it’s due.

The She Makes Comics Kickstarter has only a few days left – show your support, quick!