sisyphus and surplus: mel o’callaghan and the 2014 budget 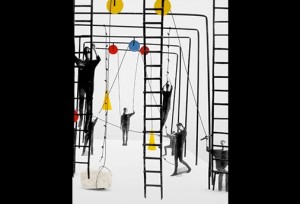 I stand shivering lightly in my black singlet and stretchy black pants, flexing each knee again and again, standing on tiptoe to combat the air which has only just turned cold. I am with a group of others, and we arrange ourselves in a line at the door.

‘Ok, who wants what?’ our leader asks, and we rattle off our preferences.

‘We’ll take the pulley’, says another, ‘to start with’.

‘Can I have the black cylinder?’ I ask ‘I haven’t tried that one yet’.

‘That’s easy!’ our leader chastises, ‘it weighs practically nothing.’

But she lets me have it.

We walk outside silently, like a line of black ants, calm and regimented. This is our routine. We remove our shoes and climb the ladder, taking our positions on stage. Still silent, we begin to move the objects. I pull a rope to lift the black cylinder, which isn’t easy, actually. Slowly and deliberately, I pull the rope, up and down, again and again, the pattern embedding itself into my muscles. The rhythm becomes internal and I am entranced by the efforts of my own body, finding new ways to distribute the weight. I lunge, bending each knee alternately as I feel the resistance of the rope, and drag my arms across the length of my chest. I become tired, and the work is relentless. My mind bends to the effort required by the cylinder, until I feel its boundaries dissolve into pure movement, just on the edge of frustration. It’s almost like a battle, but rehearsed and interminable, meaning blurred and stripped through repetition. Usually, we change objects several times, but today I stay with the black cylinder. It takes me a while to notice when it’s time to leave the stage.

The ritual, of course, is really an art performance in which I am a volunteer. Parade, conceived by Australian artist Mel O’Callaghan, was commissioned for this year’s Biennale of Sydney. The work, which runs throughout the duration of the Biennale, is installed on Cockatoo Island inside one of the ruined warehouse spaces of the industrial precinct. The cavernous room, which once housed heavy machinery, is now given over to performers, clad in black, slowly heaving objects through a system of pulleys, and climbing up and down stiff metal ladders. Audiences filter in and out, the spectacle of human effort anomalous inside the machine of international contemporary art.

O’Callaghan’s performance operates in pursuit of the absurd. She draws on the mythical plight of Sisyphus, condemned to push a heavy boulder up a mountain, only to have it roll down again, a pattern endlessly repeated. Sisyphus embodies both futility and enormity of effort required to maintain it, a literally maddening combination. For O’Callaghan, the myth of Sisyphus demonstrates the ultimate absurdity of the human condition, a notion also explored by Albert Camus. For Camus, the absurd presents itself when we stop to ask the question ‘why?’. It is when the pattern of life- ‘rising, tram, four hours work in the office or factory, meal, tram, four hours work, meal, sleep’- is interrupted by exhaustion. He writes that ‘everything begins in that weariness tinged with amazement’.

In that state of consciousness, of being acutely aware of futility and effort, the grinding pattern of repetition, Camus writes that the absurd is the presentation of a choice: ‘it is the gradual return into the chain or it is the definitive awakening. At the end of the awakening comes, in its time, consequence: suicide or recovery’.

Camus’ articulation of the problem has an existential urgency to it, but recently, I have fully understood the sense in which he poses this question. For me, the question of ‘why?’ has arisen with the release of the federal budget.

I live in Canberra, a source of amazement to many people I have met while volunteering at the Biennale of Sydney. It seems to them a place devoid of creativity and life, the ‘City of the Dead’, as Bob Carr recently caricatured it in his diaries. As much as I protest that this isn’t the case, the federal budget, which will cut over 16,000 jobs, decimating the Canberra economy, will turn this place into a graveyard. The city itself is a conceptual schism- comprising a left-wing populace serving a government which would seek to destroy its very existence. The political agenda tabled in the budget already so much resembles the stage setting of Parade, a harsh arena of pulleys and weights, the endless talk of ‘belt-tightening’, efforts expended in service of no particular good. I’m speaking of course, of the Sisyphusean myth of deficit and surplus that has driven the cruelties of government policy.

The extent to which politics now constitutes a theatre of the absurd is evident everywhere. Joe Hockey dances in his office before delivering a budget that will destroy the prospects of my generation. Tony Abbott smirks as a pensioner harangues him about his cuts to welfare. His only answer for her is the observation that she ‘clearly didn’t vote for the Coalition’. She protests that it is not about who she did or didn’t vote for, this interminable battle with no meaningful outcome, but Abbott remarks that everyone must do his or her bit. We must roll this boulder up the hill. We must now pay more at the doctor to fund future research into medicine, medicine we will not be able to afford. The unemployed receive no support, until they have been unemployed long enough, and then the payment becomes some sort of meagre reward for joblessness, and then the cycle continues. The deregulation of university fees will ensure degrees will cost more, and their value for the majority will decrease. The reason given is always the same- we must fix the deficit. But why? There is no discernible reason for the timescale imposed, and the people chosen to bear the brunt of its weight.

The abstract goal of surplus over all else represents a complete and total divorce with reality. As Camus writes, the absurd is not merely a feature of the human mind, but exists in the confrontation of humans with their environment. In O’Callaghan’s work, performers are forced to operate within environments which are necessarily inhospitable and strange, their consciousness consumed by the awareness of the body performing tasks in a loop. With this budget, politics has moved so far into the breach between existence and reality that it has become inhuman, and our compliance with it absurd.

Budgets should look toward the future. They should be blueprints. As Camus writes, ‘we live on the future: ‘to-morrow’, ‘later on’, ‘when you have made your way’… such irrelevancies are wonderful, for, after all, it’s a matter of dying’. Yet this budget is devoid of the comfort of vision; instead it is full of contradictory logic that traps us in a futile loop, in which time does not exceed our existence. With this budget, I feel shackled to time, to the threat of debt and nothingness, to the inevitable degradation of the environment and the slipping away of lucidity and creativity. Camus writes that in the recognition of one’s actual relationship to time, we are seized by horror, recognizing our ‘worst enemy’. He writes, ‘To-morrow, he was longing for to-morrow, whereas everything in him ought to reject it. That revolt of the flesh is the absurd.’

I volunteer in an arts project, exploring the notion of repetition and the loop. But perhaps when the Biennale ends in June, if I’m still only in part-time work, or no work at all, I’ll be building roads or working for the dole (after six months of course), or trying in some other way to operate within the macabre apparatus that Abbott and Hockey have engineered. Will there be much difference? I’m not sure. At least O’Callaghan’s performances only go for twenty minutes.

Parade is on every day of the Biennale of Sydney, which closes on the 9 June.