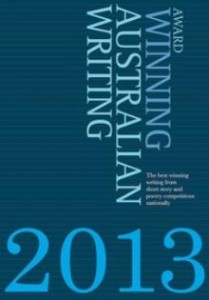 Award Winning Australian Writing 2013 is an anthology of 52 of last year’s competition winners in short fiction and poetry. The book features a different variety of competitions each year, and you’ve probably never heard of most of them. In Carmel Bird’s introduction, she reminds us that there are more than 300 smaller annual literary competitions in Australia, which means there are almost as many opportunities for emerging writers in this country as there are days in the year: impressive! Notably, prose is dominant, making up about two-thirds of the collection—suggesting more competitions celebrate fiction than poetry.

The editor, Adolfo Aranjuez, saw a theme of relationships in this year’s anthology; the characters in these stories struggle to relate to one another or, conversely, connect with strangers. I also noticed a common theme of travel—lots of journeys, planes, trains, ships, and ventures outside of comfort zones. Most interesting is the fact that feminist concerns recur constantly throughout the stories and poems, and this, for me, is a unifying anxiety of the anthology.

These stories and poems all won competitions between July 2012 and June 2013, while the country was consumed by a political witch-hunt that ultimately saw our first female prime minister burnt at the stake. The contributions to this anthology witness wrongness against women and expose the sickness of a society that, for all our progress, remains sexist at its core.

I was impressed by the characterisation and voice of the protagonists in Gregory Yeates’s “Empathy”, Luke Thomas’s “Regatta”, and Margo Lanagan’s powerful feminist speculative fiction “Bedazzle”. I enjoyed the honesty of Natalie Sprite’s “It Feels like Happiness”, and the brightness of the young child who declares to her single mother before diving into a pool, ‘I’m brave as a woman!’ That same courage of the everyday woman is suggested in Amy May Nunn’s poem “Mother Tongue (calling long distance)” with the line ‘point at cliffs I’d sooner jump off than be a mother’.

Luke Thomas’s “The Regatta” observes ‘the carefree vulgarity of single men’ and the backpacker culture that sees them ‘drinking and fighting and fucking their way across oceans and continents’. Further, when the protagonist thinks about becoming a father, he recognises the threat that our culture poses to women:

He couldn’t wait to hold that tiny hand… until it grew into the hand of a woman. Holding that hand, he’d guide and protect her. He’d warn her about boys and men. He’d keep her safe. He’d keep her from getting broken.

This is the same menace that Laura Elvery’s shopgirl protagonist encounters in “Replica”, when she notices the sexual attention of a man who has left his young daughter in another part of the store while he talks to her:

He must stare at girls all day long like this because he doesn’t seem embarrassed at all. His eyes trace across my neck. He’s old, I guess, but not that old. Sort of looks like some teacher I might have had for a semester of history in grade nine before he got transferred to a better school.

Margo Lanagan’s “Bejazzle” presents a haunting speculative future where Australian feminists, or ‘Sheelas’, have formed their own subculture with their own fashion, rituals and customs. The male protagonist in this story has little tolerance for these women, calling them a ‘bunch of bloody whingers’ and ‘miserable cows’ that ‘should just get over it’:

He sent a vicious gaze over the Sheela he could see best, the one who was facing him between the gap in the seats. She was one of the lipless ones. He leaned closer to Su, muttered under the accelerating train-rattle, ‘Why would you do that’.

‘Do what?’ Su re-angled the Kindle, as if worried his breath would mist over the screen.
‘Make yourself so ugly? I mean, under all that gunk you’ve got a perfectly nice-looking girl—’ Now Su was giving him that bridling look. ‘What?’
‘I don’t know,’ she said. ‘Maybe you get sick of everyone expecting you to be decorative. Pervy blokes on trains included.’
‘I’m not being pervy! I’m not expecting anything! Aah, forget it.’
‘Yes, good idea. Why don’t you sit back and enjoy the scenery out the window?’
Such a bitch. He was close to saying it; if she hadn’t delivered that mad rant that time, against the word, and the word being used about her in particular, he would have said it out loud. It didn’t matter; she heard it anyway. It burst in the air between them, spittle flying on them both.

The pressure of ‘everyone expecting you to be decorative’ as a woman—such as the way commercials push a plethora of beauty products and feed society’s unhealthy obsession with appearing younger, slimmer and more desirable at seemingly any cost—is perhaps what motivates the woman in Liz McQuilkin’s “Five Senses of Distaste” to undergo liposuction:

a middle-aged woman remoulded.
The sluggish stream of glutinous, yellow fat
was siphoned through transparent plastic tubing
from love handles, folds of stomach, ample thighs
to an unseen destination.

And, like her disappearing curves, if it weren’t for this publication, most of the winning pieces collected here could easily have been sucked into the darkness of desk drawers and swiftly forgotten. But, thanks to this book, these stories and poems are still being read. And for that, I am grateful this series exists.

Bronwyn Lovell lives in Melbourne. Her poetry has been published in Australian Love Poems, Antipodes, Cordite Poetry Review and the Global Poetry Anthology. Bronwyn has won the Adrien Abbott Poetry Prize and been shortlisted for the Newcastle Poetry Prize, the Bridport Prize, and the Montreal International Poetry Prize. She works as the Publications Officer for Writers Victoria.